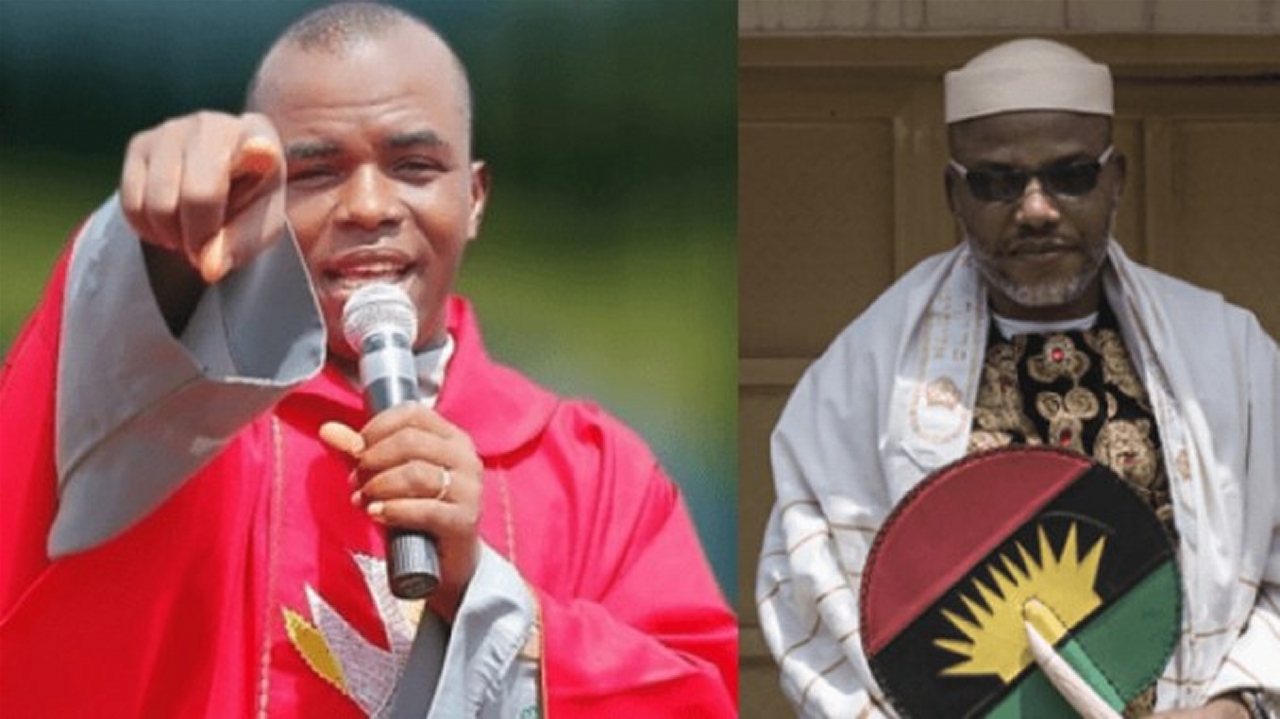 Rev Father Ejike Mbaka, founder and Spiritual Director of Adoration Ministry, Enugu, Nigeria (AMEN), has blamed governors for the arrest of the leader of the Indigenous People Of Biafra, Mazi Nnamdi Kanu.

However, he did not directly mention Kanu’s name throughout the course of his message.

Firing from all cylinders during his popular Wednesday weekly ministration tagged E No Dey Again, Fr Mbaka startled the congregation when he hinted that some state governors had lured the IPOB leader into the hands of his traducers.

He chided the unnamed governors over their role in Kanu’s arrest and current travails describing such action as selfish.

While blessing inmates and correctional centres across the country, Mbaka’s countenance suddenly changed and he said:

“Don’t sell your sons and daughters because of political promise that you are not even sure will materialize tomorrow.

“Don’t sell your son because you are governors today! Live and let live.

Leaders beware! Their stubbornness will collapse this country one day! If care is not taken, will happen like an earthquake!

“Even if you arrest 100 people, it will not stop the agitation. If anything, it will worsen the situation,” he warned.

It was not clear which governor or governors that the priest was referring to, but it appeared that Southeast governors were not unconnected with Mbaka’s vituperations.

While jabbing at those celebrating Kanu’s current ordeal, the AMEN founder said that it was just a matter of time and everyone would feel the heat, including clerics, if care was not taken.

He said: “Many people are clapping for them (federal government) now. But when the heat becomes unbearable; when the sun riots, when heavens shake you will understand.

“When they killed Jesus Christ and put him in the prison-grave – Jesus’ prison was in the grave – they thought it was all over for Him, that the end had come.

“Whoever that you have in heart now that is in the prison, may the Lord be with that person. May the Lord show such persons mercy. May they receive favour; favour for my people.

“May the Lord show him favour, even from the prison warders that would be protecting him.

Mbaka also took a swipe at the federal government over what he called, worsening poverty, hunger and insecurity in the country, and charged the present administrations and leaders at all levels to act fast and address the country’s teething challenges before it was too late.

“Our suffering in Nigeria is unnecessary. There is no reason, apart from wickedness, why people should suffer in this country.

“I remember when we were growing up. You would hardly hear that people stole. Politics was not about amassing wealth at that time. But today, kidnapping has become a multi-billion business. And if you come to the Southeast, the zone has become the hub of hardship.

“If our leaders do not find a way to put Nigeria in a good platform, one day, this country will collapse!

“If they do not do what they should do, they do not provide jobs but rather continue to amass wealth and millions of Nigerian youths keep watching them. Time shall come when what we are experiencing today would appear like mere biscuit. “Our leaders are not ready to utilize our resources well but it cannot continue like this. Vengeance is coming,” he said.