Barefaced Zulum Does Not Love Borno People -By Yemi Adebowale 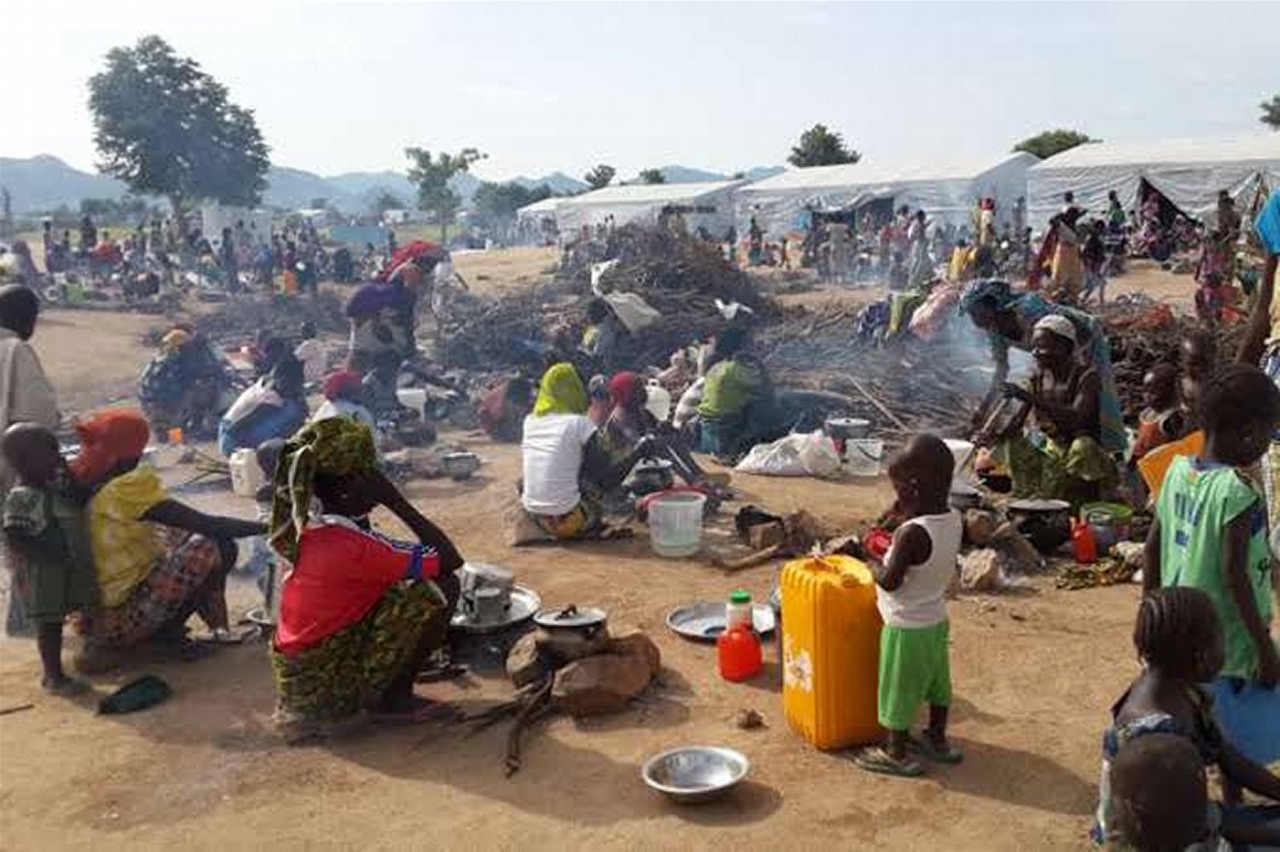 The biggest drawback to the war against Boko Haram, ISWAP and other terrorists has been the unending lies by politicians and military commanders. That has always been my position. Endless killings by the terrorists in the last seven years have proved me right. The politicians and the military tell lies about virtually everything in this war – military’s capacity, number of terrorists killed, areas controlled by the terrorists and the rest. This is why Borno and other troubled states remain prostrate. The languid governor of Borno State, Babagana Zulum is in the forefront of this deceit. He does it with so much impunity. Zulum’s latest ruse is that “there is reasonable peace” in Borno State and that the IDPs should return home. What nonsense!

But early this week, the Borno State Governor slipped and his brain experienced a bit of rearrangement. He suddenly realised that Boko Haram is in control of Abadam and Guzamala local government areas of the state. Zulum consciously stated this open secret when the Chairman, Senate Committee on Army, Ali Ndume led other senators and military officers from the army headquarters to his office in Maiduguri.

Zulum declared: “Presently, Guzamala and Abadam local government areas are still under the control of Boko Haram…Government and people of Borno State, especially those from southern and northern parts of the state, are worried over the increasing number of ISWAP groups who have been terrorising their communities.

“Just a few days ago, I received a security report that in some communities in Mandaragirau axis, in Biu LGA, that over 500 Boko Haram/ISWAP fighters were converging with over 300 motorcycles and even celebrating parties, marriages without confrontation. ISWAP is more equipped, sophisticated, intelligent and dangerous as they grow from strength to strength. ISWAP is collecting taxes along major roads in Damboa and other axes in southern Borno. It is very unfortunate.”

The lethargic Zulum has just realised that Boko Haram and ISWAP control territories and collect taxes in many communities in Borno State. He has just realised that ISWAP is more equipped, sophisticated, intelligent and dangerous. These unending deceits by politicians and the leadership of the military have been sustaining terrorism. Zulum’s brain is indeed experiencing some resetting and it is good news for the traumatised people of Borno State.

By now, Zulum’s pay masters in Abuja must be jeering him for saying less than 10 per cent of the visible truth. The truth that must be told is that about half of Borno State is a no go area. The terrorists are roaming unchecked and control these areas. Let’s hope this brain righting will encourage Zulum to face President Muhammadu Buhari and tell him to his face that Boko Haram and ISWAP control Nigerian territories in Borno State and collect taxes in many communities in the state.

Zulum enjoys grandstanding and cares less about his devastated people. This is why he has been forcing IDPs out of their encampments in Maiduguri. He wants them returned home and into the claws of Boko Haram. Zulum had dubiously claimed that reasonable peace had returned to all parts of Borno State. This is terrible. Most of those he paid meagre resettlement allowances and pushed out of some IDP camps are still very much in Maiduguri town. They have nowhere to go. It was obviously a premature move. Most of the towns and villages outside Maiduguri are still not safe as confirmed by Zulum himself this week.

ISWAP Fighters have repeatedly attacked Malam Fatori, the headquarters of Abadam LG, killing many. This is the same Malam Fatori that Zulum is planning to return 50,000 households who fled from Abadam and took refuge in Bosso, Niger Republic. The story of peace here is subterfuge. Zulum should allow the return to Mallam Fatori happen naturally. The people would know when their communities are safe.

Most of the terror attacks in Borno are under-reported. This is why Zulum goes about talking bosh. A good example is the attack last Monday at Tukur Yusufu Buratai Institute for War and Peace (TBI), a research Institute of the Nigerian Army University, located in Buratai Village, Biu LG. The terrorists came in loads with RPGs and anti-aircraft guns. Buratai residents were forced to flee to Moringa, another town in Biu. The military claimed two civilians were killed during the attack. This is not looking like the true story.
Just last Thursday, Boko Haram confidently attacked the Police Mobile Training School in limankara, Gwoza LG. We were told they were repelled. None of the attackers was apprehended.

Yet, Zulum is continuing with his murderous operation “evict all IDPs from Maiduguri.” Amnesty International is opposed to plans to close these camps, saying it would expose thousands of households to danger, but this governor has refused to budge.

Based on 38 interviews with former IDP returnees and individuals currently living in camps within Maiduguri, Amnesty said the survivors expressed fear for their lives “as they are being forced to leave the camps at short notice and many are coerced to remain in resettled areas despite escalating attacks.”

Even the pathetic story of Yagana Yerima, a 30-year old mother at Teachers Village IDP camp, did not touch Zulum’s heart before the camp was forcefully dismantled. Yerima said she did not have anywhere to go even if given the N50,000 resettlement aid, as her village is yet to be rebuilt and her husband is still nowhere to be found seven years after he was arrested and detained by the military in connection with Boko Haram.

She adds on December 17 last year: “I was arrested along with my husband by the military and taken to Giwa barracks from Pulka in Gwoza LGA some seven years ago. When I was released, I didn’t have anywhere to go. As a result, I went to the IDP camp. I have been living in the camp without any means of livelihood or source of income. I survive by the handouts given by humanitarian agencies. Now the Government is saying we should leave the camp to our villages but our house has not been rebuilt and there is no security in our village.”
It should also be noted that before Zulum became governor, in a number of communities in Borno State where IDPs were earlier resettled, they had to scamper to Maiduguri when they came under Boko Haram’s attacks. Schools, homes and clinics built for them were destroyed by the terrorists. The story the government told them then was that the communities were now safe. It turned out to be a scam.

Besides the issue of security, the homes and businesses of IDPs have been destroyed by the terrorists and they will require basic infrastructure if they are to be returned home today. Things are evidently not in place for these people to restart their lives. The miserable money being paid to them won’t get them anywhere.

The IDPs will naturally leave Maiduguri and return to their homes if genuine peace returns to the troubled communities. Even a blind man would know when Boko Haram and ISWAP are genuinely eliminated. This is the task that must be done; not forcing IDPs out of Maiduguri into the claws of terrorists. Zulum must be stopped from continuing with his hazardous action.

For me, Zulum has always been a muddled governor and I have no apologies for this. I remember one television interview with him in July last year, during which he also refused to be truthful about the plight of his people. Zulum was economical with the truth throughout the interview. On the one hand, he admitted that a large number of his people could not go to their farms because of raging insecurity, stating: “The Nigerian military should create the enabling environment for farmers to go to their farmlands so that they can cultivate their lands. It is no longer sustainable for our internally displaced persons living in IDP camps and host communities to receive food and non-food items from donor partners. People must earn their livelihood if we want this insurgency to come to an end.”

On the other hand, during the interview, Zulum said peace was gradually returning to the North-East after over 11 years of Boko Haram. Which peace is this governor talking about? If peace is gradually returning, close to a million people will still not be living in IDP camps in the state.

So, how did this poorly-equipped Army dismantle Boko Haram as earlier claimed by Zulum? That this governor is muddled is no longer in doubt. He is clearly not in love with his people. The people of Borno State are in a “one chance” bus.