Why Nnamdi Kanu Is Not Allowed To Change His Clothes 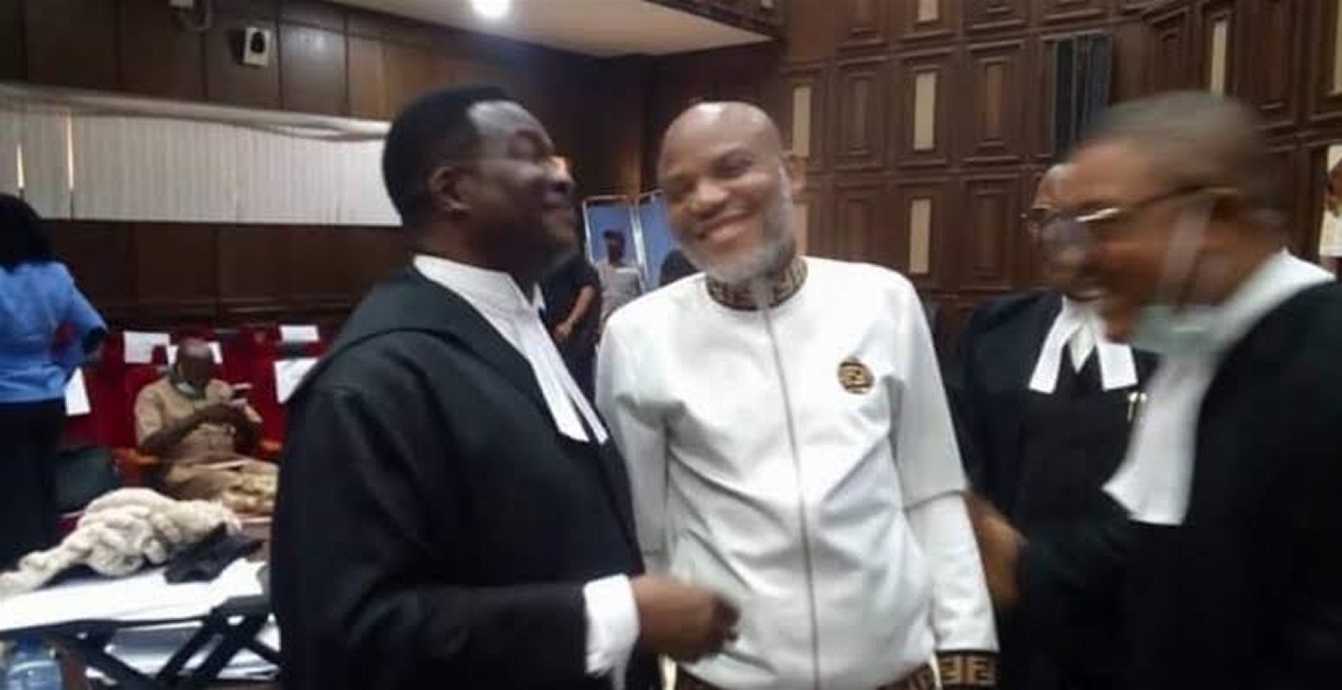 The trial of the Nnamdi Kanu, leader of the Indigenous People of Biafra (IPOB), resumed on Wednesday at the Nigerian Federal High Court in Abuja, the capital city with him wearing the regular Fendi outfit.

This is against the order made by Justice Binta Nyako in December 2021 that Kanu be allowed to change his outfit before his next appearance in court.

Mike Ozekhome, the lawyer to Mr Kanu, also complained to the court that the DSS have refused to allow Kanu a change of clothes contrary to a definite order of the court that he must be allowed to wear a new outfit.

Responding to Ozekhome’s complaint, the judge asked the Director of Legal Services of the DSS to provide explanations to the issue.

The secret service’s lawyer explained that “clothes with lion’s head offend the standard operating procedures” of the SSS.

The judge then asked the type of cloth Kanu prefers to wear.

In response, Kanu said, “I want to wear the clothes of my people, “Isi Agu.”

The court, however, refused his request but asked the DSS to provide Kanu with his eyes glasses which his lawyers said was taken away from him.

Meanwhile, the Prosecution Counsel, Shuaibu Labaran, informed the court that the defence counsel had filed and served him with two applications, which he had responded accordingly.

He added that the first application is seeking an order quashing the 15-count amended charge levelled against Kanu and the other one seeking his bail.

Counsel to Nnamdi Kanu, Mike Ozekhome complained to the court that the DSS have refused to allow Kanu a change clothes. He added that, thrice, Kanu’s younger brother has been refused access to DSS facility where Kanu was detained.

The lead counsel also lamented that since Kanu was arrested and detained, his eye glass was seized by the DSS and has not been returned to him. He asks that his Glasses, be returned to him so he doesn’t go blind.

Justice Nyako said the complaint has been noted and directed Ozekhome to proceed with the business of the day.

The application, with 34 grounds, and supported by 36-paragraph affidavit, Ozekhome said, also seeks for an order acquitting and discharging Kanu for want of jurisdiction and defective, baseless and incompetent charges.

The matter was then adjourned to April 8 to rule on Kanu’s applications to quash the charge.

Mr Kanu is accused of various offences, including treasonable felony and terrorism, offences he allegedly committed in the course of his separatist campaigns.