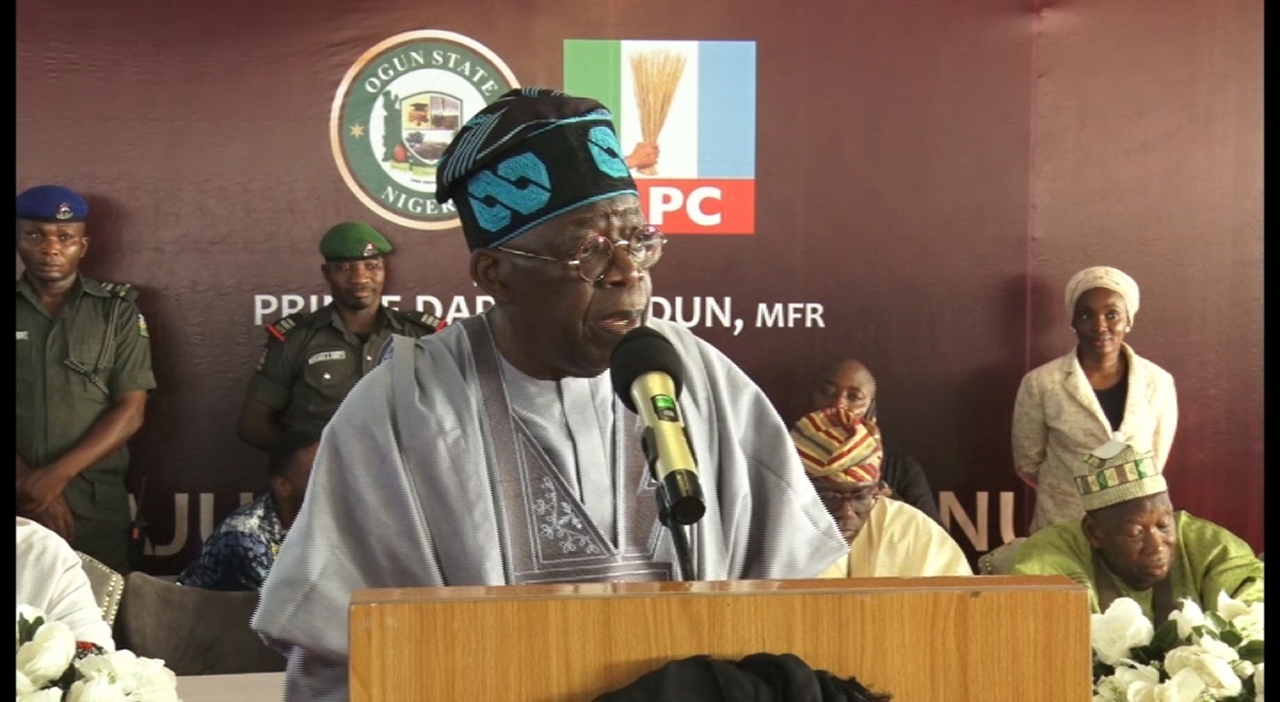 In Bola Ahmed Tinubu’s unusually acerbic and desperate political speech in Ogun State on Thursday, he dropped four unmistakably broad hints that he will transition to secessionist Yoruba nationalism should the All Progressives Congress (APC) deny him its ticket, especially if this is done through the circumvention of the established protocols for choosing a party nominee.

The first hint is that he spoke in the Yoruba language throughout the speech even though there were non-Yoruba people like Governor Abdullahi Ganduje in the audience, and his Yoruba listeners all speak English.

It’s easy to dismiss this point as a backdoor validation of the supremacy of the English language and a sly dig at Tinubu for speaking in Yoruba. But that would be both wrong and simplistic. Most people in polite society refrain from speaking in a language that excludes friends and associates in formal and informal gatherings unless they want to make a symbolic statement.

Although Ganduje earned his PhD from the University of Ibadan and probably speaks a smattering of Yoruba, he isn’t proficient enough in the language to understand what Tinubu said. Plus, several of the people who accompanied Ganduje to Ogun from Kano don’t speak a lick of Yoruba.

Tinubu knew this. In other words, his choice of Yoruba to communicate his frustration over what he perceived to be betrayal by those whose ascension to power he helped to facilitate was deliberate.

The second hint is what seems to me his premeditated appropriation and personalization of the Yoruba nationalist term “Orile Ede Yoruba” to refer to Yoruba land in relation to other parts of the country. A Yoruba friend told me that the term was popularized by Yoruba irredentist groups, such as those led by Sunday Igboho, in the last two years.

Tinubu said, “Buhari contested the first time and crashed; second, he crashed; third time he crashed and wept on national television and vowed that he would never contest again. I then went to him and told him that this is not a matter of tears. I told him he would run again and would win but the condition is that “oonii f’oro Orile-ede Yoruba s’ere [he won’t trivialize matters concerning the Yoruba nation…]”

That was undoubtedly a dog whistle to Yoruba nationalists. A dog whistle is the use of words and imagery in ways that seem harmless and innocent on the surface but that actually sends a special, often divisive, message to intentionally preselected groups of people whose backgrounds allow them to decode the message in ways the uninitiated public won’t.

My Yoruba friends said several Yoruba nationalist WhatsApp groups deciphered Tinubu’s message exactly as he enciphered it. Some welcomed it and others pooh-poohed it for reasons I’ll come to shortly.

The third hint that Tinubu might transmute into a full-blown Yoruba ethnic nationalist if he is denied APC’s nomination through subterfuge can be gleaned from the regionally dichotomous rhetoric he used in justifying why power should move to Yoruba land, which he personalized to himself.

He said, “Agbara yi, kii se ti Oke Oya nikan. Asiko ti to ti a maa gbaa.” Rough translation: “Power is not for the North alone. It’s time for us to get it, too.” (Oke Oya, which literally translates as “above the River Niger,” is the Yoruba term for Northern Nigeria.)

Tinubu has not been associated with that kind of rhetoric in the last seven years—at least in public. When Amotekun was launched in Yoruba land in January 2020, for instance, Tinubu refused to openly embrace it because he considered it divisive and injurious to his presidential aspiration.

After tremendous pressure from Yoruba people who wanted to know his stand on the security outfit, he issued a run-with-the-hare-and-hunt-with-the-hounds statement that pretended to be statesmanlike and evenhanded but that actually only cleverly concealed its attempt to please the Aso Rock cabal whose blessing he actively sought for his presidential ambition.

Neither Governor Babajide Sanwo-Olu nor his deputy, who are both beholden to Tinubu, attended the formal launch of Amotekun, and Lagos was the only Southwest state where an Amotekun solidarity rally was disrupted by the police.

At the same time, in July 2019, in the aftermath of the brutal murder of Afenifere leader Reuben Fasoranti’s daughter by people that the Lagos news media formation said were Fulani herdsmen, Tinubu asked “where are the cows?” to vitiate the accuracy of this assumption, which caused Tinubu to be seen in the Southwest as a thoughtless lackey of the Fulani.

Tinubu’s furtive opposition to Amotekun and his evidence-free exculpation of “Fulani herdsmen” in the murder of Fasoranti’s daughter were intended to portray him as a large-hearted Nigerian patriot who wasn’t beholden to narrow ethnic loyalties, but they are sore points for Yoruba nationalists. That’s why his dog whistle to them isn’t being well received by some of them who now derisively call him an “emergency Yoruba nationalist.”

The last bit of evidence that Tinubu will go full-blown Yoruba nationalist if the primaries don’t go his way emerged from the list of favors he said he didn’t ask from Buhari after helping Buhari to ascend to the presidency. He said he didn’t ask for contracts, a ministerial appointment, fura, or women.

Fura (da nono) is a stereotypic Fulani gastronomic classic. Buhari is Fulani. Of all the favors he could list, why did Tinubu mention fura? He could simply have said “food,” but he chose to say “fura.” That was another metaphoric dog whistle.

This isn’t the first time Tinubu has recoiled to his subnationalist enclave when he isn’t having his way. In an April 13, 1997, interview Tinubu granted ThisDay, for instance, he said, “I don’t believe in one Nigeria” because he was disillusioned by the invalidation of the June 12, 1993, presidential election and Abacha’s subsequent brutal dictatorship.

To be fair to him, though, almost all Nigerian political elites, as I pointed out in a previous column, are situational, opportunistic “patriots.” They’re irredentists when they’re outside the orbit of power and exaggerated “patriots” when they have access to the public till.

Northern Muslim elites invoke Islam and Sharia as bargaining chips when they are out of power. Northern Christian elites play up their cultural difference with the Muslim North and brand themselves as “Middle Belters” as a form of protest. Yoruba elites who want to negotiate a better deal for themselves appeal to Yoruba nationalism, specifically Oduduwa Republic.

Igbo elites conjure up the specter of Biafra secession to call attention to themselves, and elites of southern minorities have used the threats of Niger Delta militancy to gain concessions.

Tinubu has signaled very clearly that if he is shut out of APC’s primary election, he would subvert not just the party but the country. At 70, he has little to lose, and there’s no one more dangerous than a man who thinks he is already down and has nothing to lose.

There are only three ways to checkmate him. One, allow the primary election to proceed but undermine him so he loses. Two, should he win the primaries in spite of attempts to stop him, sabotage him so he loses the general election. Third, if the first two options are too risky, choose an urbane, cosmopolitan Yoruba politician like Governor Kayode Fayemi. That would blunt Tinubu’s appeals to Yoruba nationalism.

Of course, as I’ve said repeatedly, my own preference is for an Igbo person to emerge as president in 2023 in the interest of national unity

As I was completing this column, I read Tinubu’s sneaky retraction of his Abeokuta speech. This is called closing the stable door after the horse has bolted. It would have been more honorable to be quiet or to stick to his guns. Retracting won’t change his fortunes with the Aso Rock cabal. It only shows him as a desperate, unstable person who is governed by his impulses.