The Giant Rhino: One Of The Largest Mammal Ever 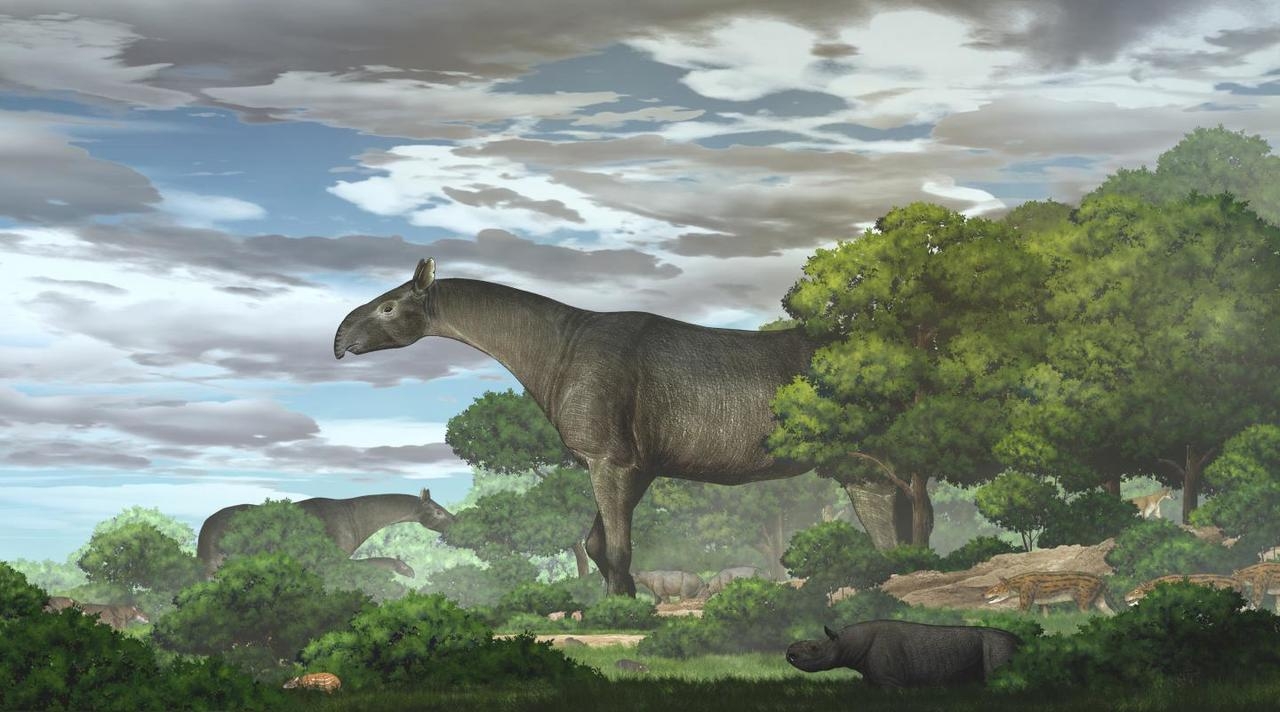 25 million years ago, giant rhinos more than 16 feet tall roamed the Earth. They are considered the largest land mammal that ever lived — but their evolutionary history and dispersal across Asia have left scientists puzzled.

Paleontologists have now found fossils for a new, sixth species of the extinct giant rhino, Paraceratherium linxiaense, which are shedding light on how the animal moved across China, Mongolia, Kazakhstan and Pakistan. The team of researchers, led by Deng Tao from the Institute of Vertebrate Paleontology and Paleoanthropology, published its 2015 findings in a new study this week in the journal Communications Biology.

Researchers uncovered one fossil of a completely preserved skull, jawbone and teeth with their associated atlas, the part of the body where the head connects to the spine. Another fossil consists of three vertebrae.

The remains provided enough detail for the team to build a digital 3D model and compare them to other giant rhinos — leading them to classify the new species, distinct with its longer, more flexible neck.
The rare fossils, found in Gansu Province, China, located at the northeastern border of the Tibetan Plateau, date back to the Late Oligocene, an epoch that lasted from about 34 million years ago to about 23 million years ago.

These giant rhinos were significantly larger than the rhinos of modern day, with estimated shoulder heights of about 16 feet, and a weight of over 40,000 pounds. They also lacked horns.

The discovery sheds light on how the region has transformed since these massive creatures went extinct.

“The Tibetan region likely hosted some areas with low elevation, possibly under 2,000 meters during Oligocene, and the lineage of giant rhinos could have dispersed freely along the eastern coast of the Tethys Ocean and perhaps through some lowlands of this region,” researchers wrote in the study.

Researchers determined that, in the Early Oligocene, the animal dispersed westward to Kazakhstan, with a descendant expanded to South Asia, then returning north to cross the Tibetan area to eventually produce P. linxiaense to the east in the Linxia Basin.

“Late Oligocene tropical conditions allowed the giant rhino to return northward to Central Asia, implying that the Tibetan region was still not uplifted as a high-elevation plateau,” Deng said.