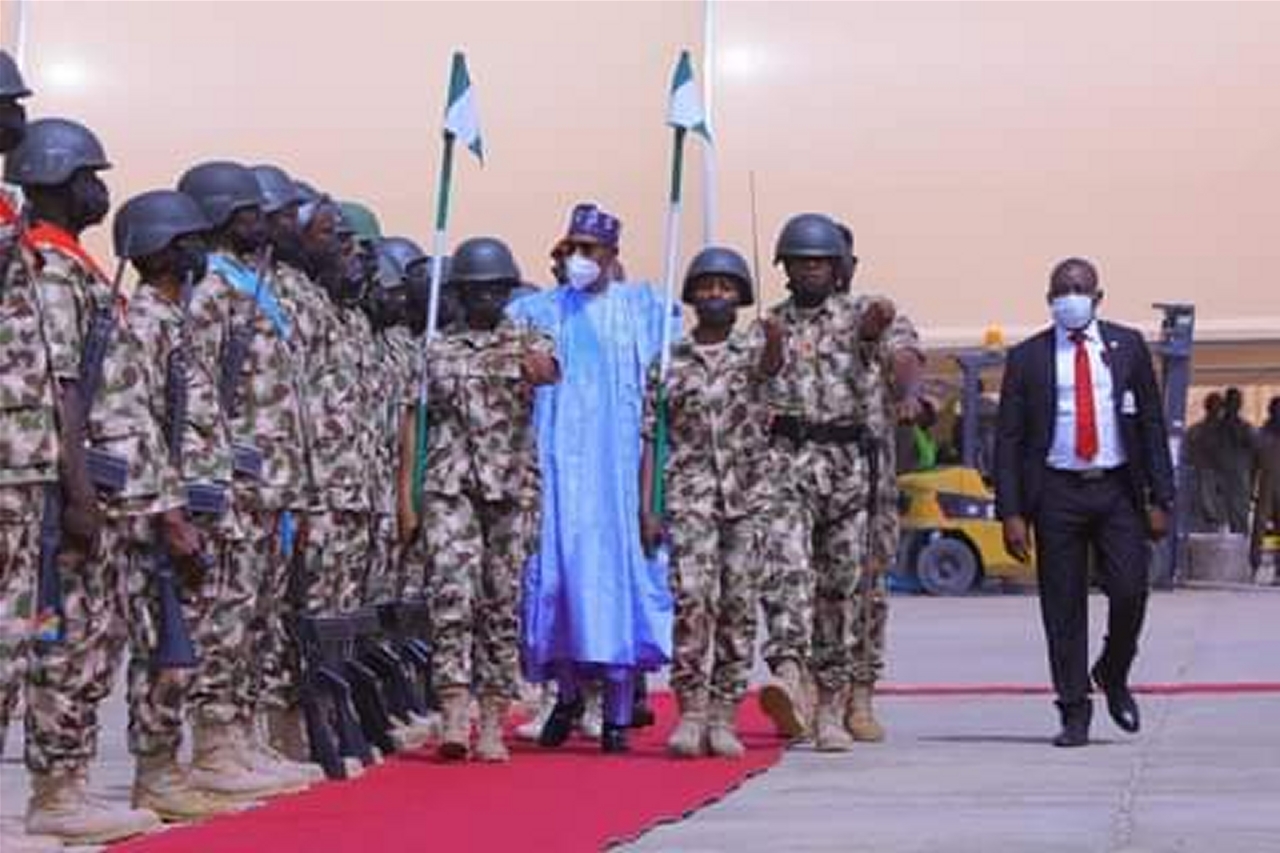 WE OWE YOU A DEBT OF GRATITUDE, GIVE NO BREATHING SPACE TO TERRORISTS, CRIMINALS, PRESIDENT BUHARI TELLS MILITARY, SECURITY AGENCIES

President Muhammadu Buhari Thursday in Maiduguri, Borno State, said the nation owes a debt of gratitude to military men and women, and security agencies currently tackling security challenges in the country, particularly the many who paid the supreme price, assuring family members that the government will continue to support all the loved ones.

The President, on official visit to personnel of the Armed Forces and security agencies in Operation HADIN KAI at the Maimalari Cantonment, charged the military and security agencies not to give breathing space to terrorists and criminals in various parts of the country, saying the war must be concluded with restoration of peace and reconstruction of all the affected areas.

“I am delighted to be with you this afternoon, to address you on this special occasion of my official visit to Borno State. I want to seize this opportunity to put it on record that our nation will forever be indebted to you, for your patriotic commitment to the defence of our fatherland against insurgency and criminality.

“I therefore commend you and remember all the personnel who have paid the supreme sacrifice in ensuring that Nigeria remains an indivisible and secure entity.

“As I send my heartfelt condolences to the families of our fallen heroes and pray for the souls of the departed, I want to assure you that my administration will spare no effort or resources to ensure that the widows and children of our fallen heroes who paid the supreme price in defence of our beloved country, are well cared for,” he said.

The President said wounded comrades will get the best medical attention towards their full recovery.

“While acknowledging your collective efforts at decimating and degrading the terrorists and reaffirming the inviolable sovereignty of our nation, I also wish to extol your steadfastness and untiring efforts in the face of the difficulties you experience in the Theatres of Operation.

“Your collective efforts have resulted in the relative peace being enjoyed in the region today. Under my watch, the Armed Forces of Nigeria have been provided a firm strategy and clear sense of direction to safeguard the sovereignty and territorial integrity of the country.

“We should not allow our adversaries the opportunity or breathing space to challenge or undermine our national interests and core values. The defence and security agencies should rest assured of the Federal Government’s unalloyed commitment to winning the battle against terror and criminality,” he added.

President Buhari commended the military and security agencies for the synergy that translated into successes in restoring peace and order.

“I am particularly happy to note the increasing understanding and cooperation within the military, as well as the inter-agency cooperation in the fight against the terrorists and other criminal elements in the North East.

“The outcome of this synergy is evidenced by the successes recorded in the ongoing Operation TURA TAKAIBANGO which has so far degraded the insurgents’ capabilities in the Timbuktu Triangle, Sambisa Forest and the Lake Chad Region. I am therefore pleased to acknowledge that the military and other security agencies including civilian stakeholders are adhering to the true spirit of Operation HADIN KAI which implies “jointness, synergy and cooperation.”

“By pooling together the collective resources and comparative advantages of the Armed Forces and other security agencies, we hope the enemy will now feel the ferocity of our firepower and the weight of our resolve,” the President said.

Side by side with the efforts of the Armed Forces and security agencies, President Buhari assured that his administration is developing a strategy for post-war reconstruction and peace building.

“Concerted efforts are being made to fast-track reconstruction and development programmes in the affected communities in the North East.

“I am hopeful that this will lead to the speedy resettlement of displaced persons, as well as the restoration of bubbling community life as people return to their homes.

“Alongside investment in development and reconstruction, we will sustain our investment in the Armed Forces in a manner that balances the carrot and stick,” he said.

The President said several interventions by the Federal Government had led to the procurement and delivery of large consignments of critical combat enablers, including high calibre weapons and ammunition:

“Many have been injected into the Theatre and soon other equipment that have just arrived in the country would also be deployed to the Theatre of operations. Much more equipment will be procured for the Armed Forces to cater for both the short and long-term requirements.

“I would like, at this point, to also commend the hierarchy of our Armed Forces for their strategic foresight in ensuring that some of our critical military equipment are fabricated locally.”

President Buhari also noted that repairs and maintenance of some of the vital weapons were now being carried out in the country thereby saving the nation a lot of foreign exchange and also creating jobs for our teeming population.

“As personnel of our Armed Forces and security agencies, you must understand that these items of equipment must be put to good use against the terrorists and other criminal elements. There is no room for complacency, and no need to be less than 100 per cent alert at all times.

“As your Commander-in-Chief, I want to assure you that my government will continue to work towards the provision of timely funding and procurement of equipment for the Armed Forces and other security agencies. This is intended to boost the prosecution of the ongoing war to a logical conclusion and also to serve our collective interests and well-being.

“In addition, your welfare is of utmost importance and concern to this government. I am glad that the gradual rotation of the troops in the field has commenced, as I directed. I am sure that this will minimize and possibly eliminate battle fatigue, as well as enhance troops’ morale,” he added.

The President thanked the military and security agencies for unalloyed loyalty and selfless sacrifices towards the defence of our country, adding: “Your courage and gallantry will continue to inspire others, as they echo into the future.”

“While I commend your resilience, let me remind you that there is still a lot of work to be done, to completely restore peace to the North East, stem the activities of armed bandits in the North West and North Central, as well as deal with other security challenges across the country.

“You must therefore remain steadfast and see this war to a conclusive end. In doing so, you must rely on inter-agency cooperation, and strengthen your cohesion with the troops of neighbouring Republics of Cameroon, Chad and Niger in our collective fight against the terrorists, under the auspices of the Multinational Joint Task Force. This will consolidate our efforts and facilitate the speedy return of peace and stability to the region,” the President said.

He urged the military and security agencies to continue to make Nigeria proud.

President Buhari also interacted with some of the wounded soldiers assuring them that the government was fully committed to their recovery and welfare.

In his remarks, the Commander of Theatre Operations HADIN KAI, Maj Gen. Felix Omoigui, assured troops of the President’s confidence and commitment to their welfare, especially in bringing the war to a conclusive end.

The Commander thanked the President for the visit to the troops, which he said will greatly boost the morale of all those fighting to keep the country in peace.