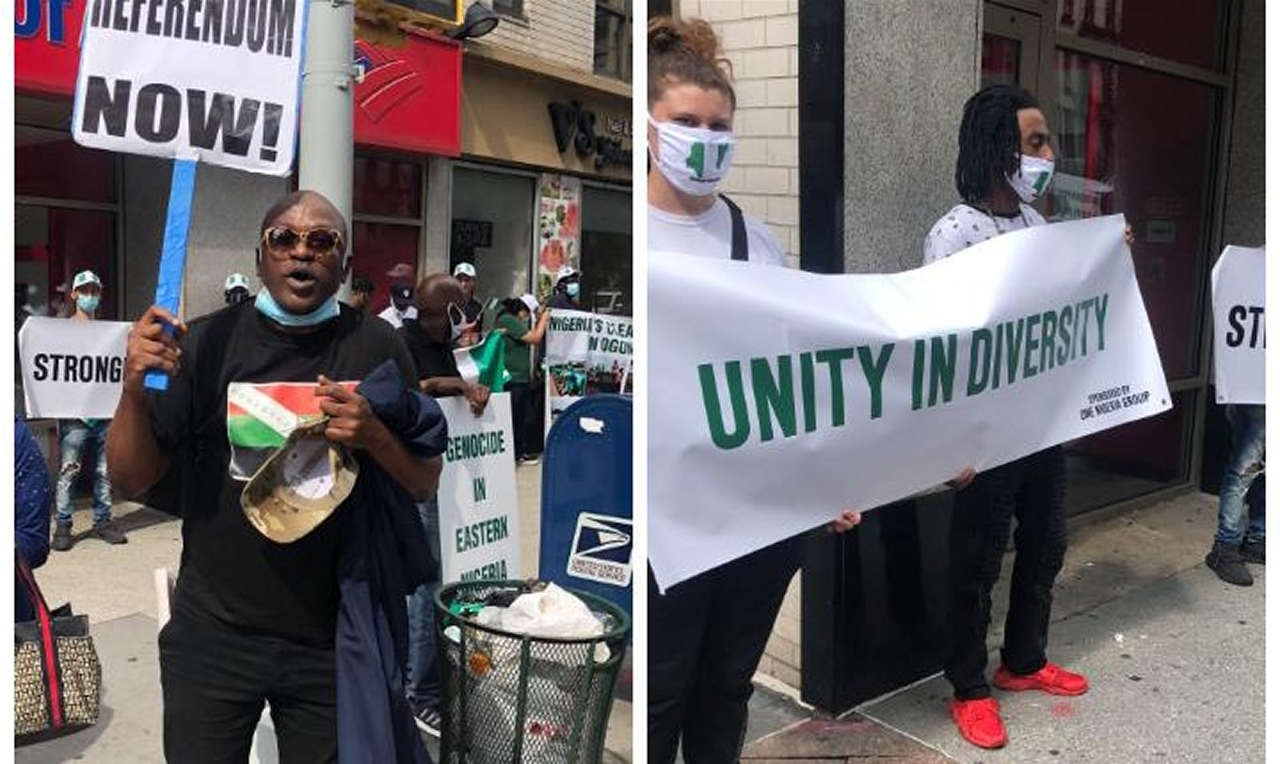 Two Nigerian groups on Monday confronted each other in New York, the United States, over the state of things in the country.

The groups converged on Nigerian House on 42nd Street, 2nd Avenue, airing opposing views about the conditions in Nigeria and its unity.

The protests came as President Muhammadu Buhari began his scheduled activities related to the 76th session of the United Nations General Assembly (UNGA), at a venue that is a stone’s throw from the Nigerian Mission.

The first group of Nigerians in Diaspora said they were there to show their support for their fatherland as world leaders assembled for the annual event.

Led by Emmanuel Duara, the group, by the name “One Nigeria Group,” expressed their support for President Muhammadu Buhari and the indissolubility of the country.

Speaking to reporters amid chants of “one Nigeria,” he said: “We are the biggest country in Africa and the biggest black country in the whole world. Whatever is going on among tribes in Nigeria, let us sit down and settle it.”

He spoke of the successes of the various programmes undertaken by the Buhari administration since 2015.

The group members waved the country’s flag, wore T-shirts and displayed banners announcing progress made, their commitment to one Nigeria and a yearning for peace and progress.

They were however opposed by anti-Buhari protesters who called for a referendum to determine the fate of the country.

Also speaking to reporters, one of the leaders, Foluso Aruleba, highlighted the various problems confronting Nigeria as a nation, asserting that there can be no peace without justice.

She regretted that the Buhari’s administration had continued to borrow money among declining value of the naira.

Aruleba, who said she was speaking for all the indigenous people of Nigeria, said: “During Jonathan’s administration, Buhari invited Fulanis from West Africa. Now, the thing has backfired and they are killing more people in the North.”

She demanded for referendum, saying that United Nations should go back to the drawing board, saying that the 17 sustainable development goals are global goals and Nigeria cannot be isolated.

She alleged that plans were on to invade Yorubaland, which she stated would not be acceptable.