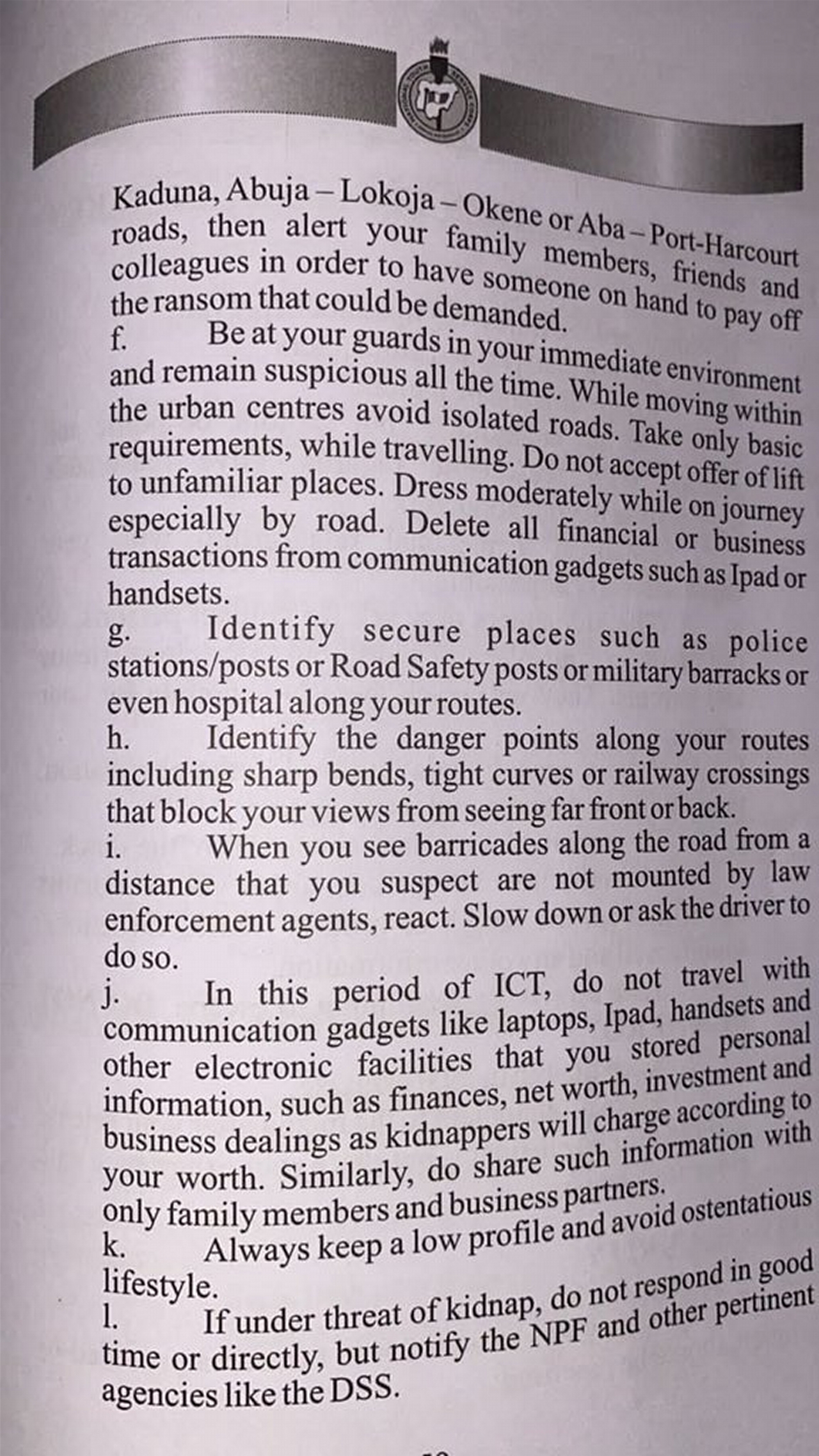 In what appears to be a bold volte-face, the authorities at the National Youth Service Corps (NYSC) have admitted that copies of its pamphlets containing security tips for staff and corps members contain the “embarrassing” clause that advises corps members to prepare for ransom payment if abducted.

The organisation, however, noted that it realised that different copies of the pamphlets are in circulation with some containing the clause and others not.

The NYSC spokesperson, Adenike Adeyemi, in a terse message to PREMIUM TIMES on Friday noted that the organisation was already investigating the situation.

The reaction followed this newspaper’s insistence that copies in its possession contain the clause, and queries the rationale behind the hurried rebuttal earlier issued by the organisation on the matter.

Mrs Adeyemi, in a short response, simply wrote; “We realised different copies are in circulation. We are investigating.”

Backstory
On Thursday, the page containing the advice for the corps and staff on reaching out to the family and friends when plying such routes it described as “high risk” had flooded the social media.

The handbook, which is titled; “Security Awareness and Education Handbook For Corps Members and Staff,” on its page 56, advised both corps members and (and staff) travelling on “high-risk” roads to alert their “family members, friends and colleagues to have someone on hand to pay off the ransom that could be demanded” in case they are kidnapped.

The document lists such roads to include “Abuja-Kaduna, Abuja-Lokoja-Okene, or Aba-Port Harcourt” roads.

The document is produced by Watchcon Security Consultancy Services – a private security outfit, in collaboration with the headquarters of the National Youths Service Corps.

More tips
The pamphlet, on page 57, advises both the staff and corps members on how to conduct themselves when kidnapped, saying; “Do not antagonise your captors, be polite and operate with reasonable regards.”

It also advises the corps members and its staff to show reasonable cooperation to the abductors, and that they should “establish personal relationship with your abductors as soon as possible.”

It further added; “The kidnappers may ask for contact persons, do not mention your place of work, but your close friends and parents. They will reach them to negotiate for your release.

“Advise your friends involved in the negotiations, they should be friendly with the captors.
‘
“Take no risk by attempting to escape,” even as it urges abductees not to attempt to be a hero making making efforts to escape.

“Make no statement to the media after your release without official clearance but share your experience with close associates,” it further counsels.

Rebuttal
But in its statement issued earlier on the matter, a copy of which it made available to PREMIUM TIMES on Friday, NYSC described the clause in circulation as the handiwork of mischief-makers.

The reads in part; “The attention of Management of the National Youth Sevice Corps has been drawn to a fake release making the rounds on the social media to the effect that Corps Members travelling on ” high risk roads” should alert their families, friends and colleagues in order to have somebody to pay off the ransom that could be demanded in the event of being kidnapped.

“Management wishes to emphatically state that the clause mischievously quoted is not embedded in NYSC Security Tips pamphlet which was put together by a highly respected retired security expert.

“Management wishes to appeal to the general public to always clarify issues with the Scheme.”

The organisation, therefore, advises Nigerians to always verify things before sharing them on social media, saying it “has offices in all the states of the federation, as well as the 774 Local Government Areas in the country for enquiries.”

“Please, be wary of falling prey to the antics of mischief makers out to ridicule the Scheme,” it added.

Backlash
Following the discovery of the clause, Nigerians have flooded the social media including Twitter, which was banned by the Nigerian government, to criticise the document.

Many also described the rebuttal by the organisation as an “open lie”, saying they were shocked that a public organisation would be so bold to continue its defence in the face of clear evidence to the contrary.

In this article:NYSC Admits Advice On Ransom Payment On Pamphlets