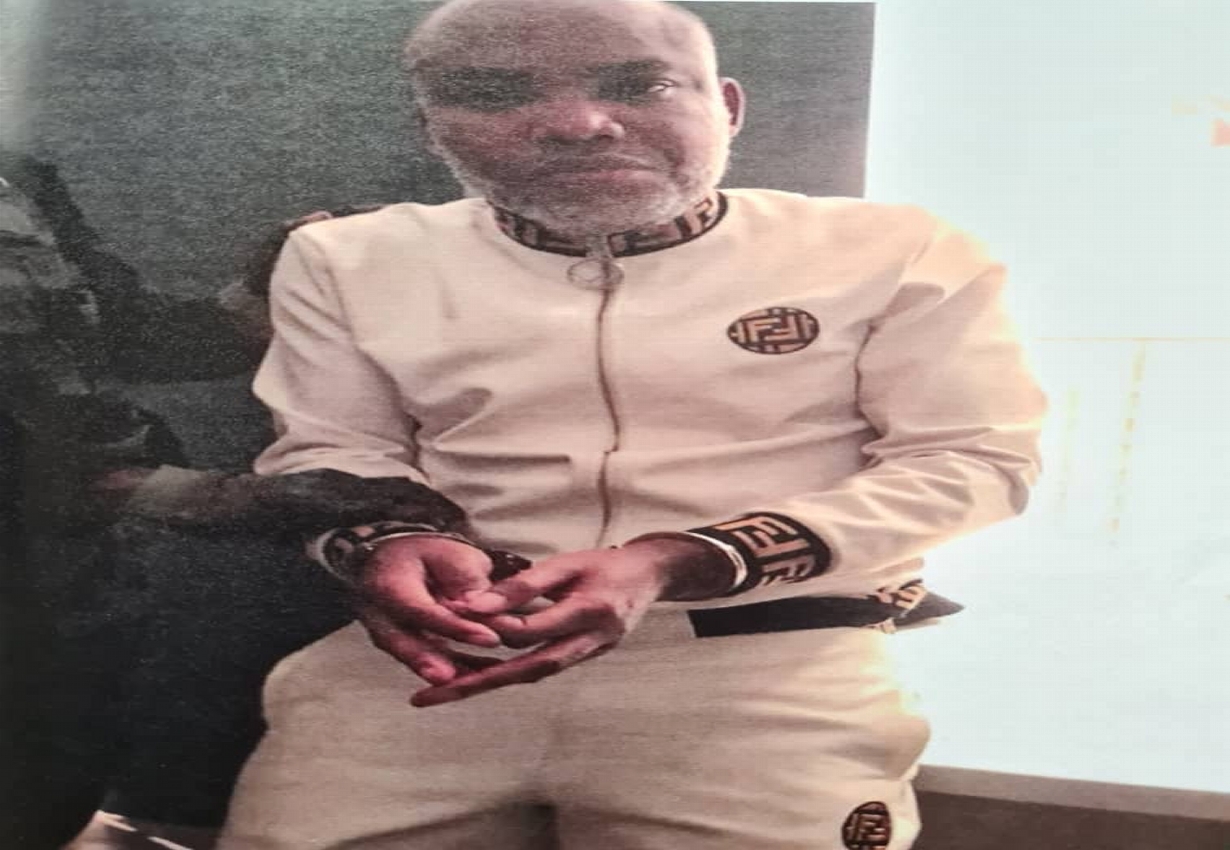 The Federal Government has arrested the leader of the proscribed Indegeniuos People of Biafra, IPOB, Nnamdi Kanu.
The Attorney-General of the Federation and Minister of Justice, Mr. Abubakar Malami, SAN, who made the disclosure to journalists on Tuesday, revealed that Kanu was arrested and brought back to Nigeria on Sunday.

He said the arrest followed a collaborative effort between security agencies in Nigeria and the Interpol.

Malami further disclosed that Kanu would be taken before the Federal High Court in Abuja for continuation of his trial on charges bordering on terrorism, treasonable felony, unlawful possession of firearms and management of an unlawful society.

Kanu is facing charges bordering on treasonable felony instituted against him at the federal high court in Abuja in response to years of campaign for the independent Republic of Biafra through IPOB.

He was granted bail in April 2017 for health reasons but skipped bail after flouting some of the conditions given to him by the court.

He has also been on the run since then after soldiers raided his father’s residence in Abia state.

IPOB was later declared a terrorist group by the defence headquarters and court after the south-east governors proscribed it.

Despite the court’s insistence on his appearance, the IPOB leader has remained abroad, and once said he jumped bail to pursue the cause of Biafra.

“Their problem is Nnamdi Kanu and the solution to their problem is referendum. They gave me conditional bail to cage me and IPOB but I refused,” he had said during a broadcast.

Owing to his absence in court, Binta Nyako, the judge who granted him bail, revoked it and ordered that he should be arrested.

Kanu, however, dismissed the arrest warrant issued against him and vowed to remain abroad to continue agitating for Biafra.

“The bench warrant against me is merely academic. It will surely be ignored by an international legal and diplomatic order that has voiced its disapproval of what is happening to IPOB in Nigeria,” he had said in one of his broadcasts.

The emergence of ESN coincided with a spike in attacks against security and government infrastructure in the south-east.

TheCable found out that killings in the south-east tripled after the security outfit was launched — the group denies any wrongdoing.

The secessionist group also forged an alliance with the Ambazonia Governing Council (AGovC), the separatist movement in Southern Cameroon, to exchange weapons and personnel