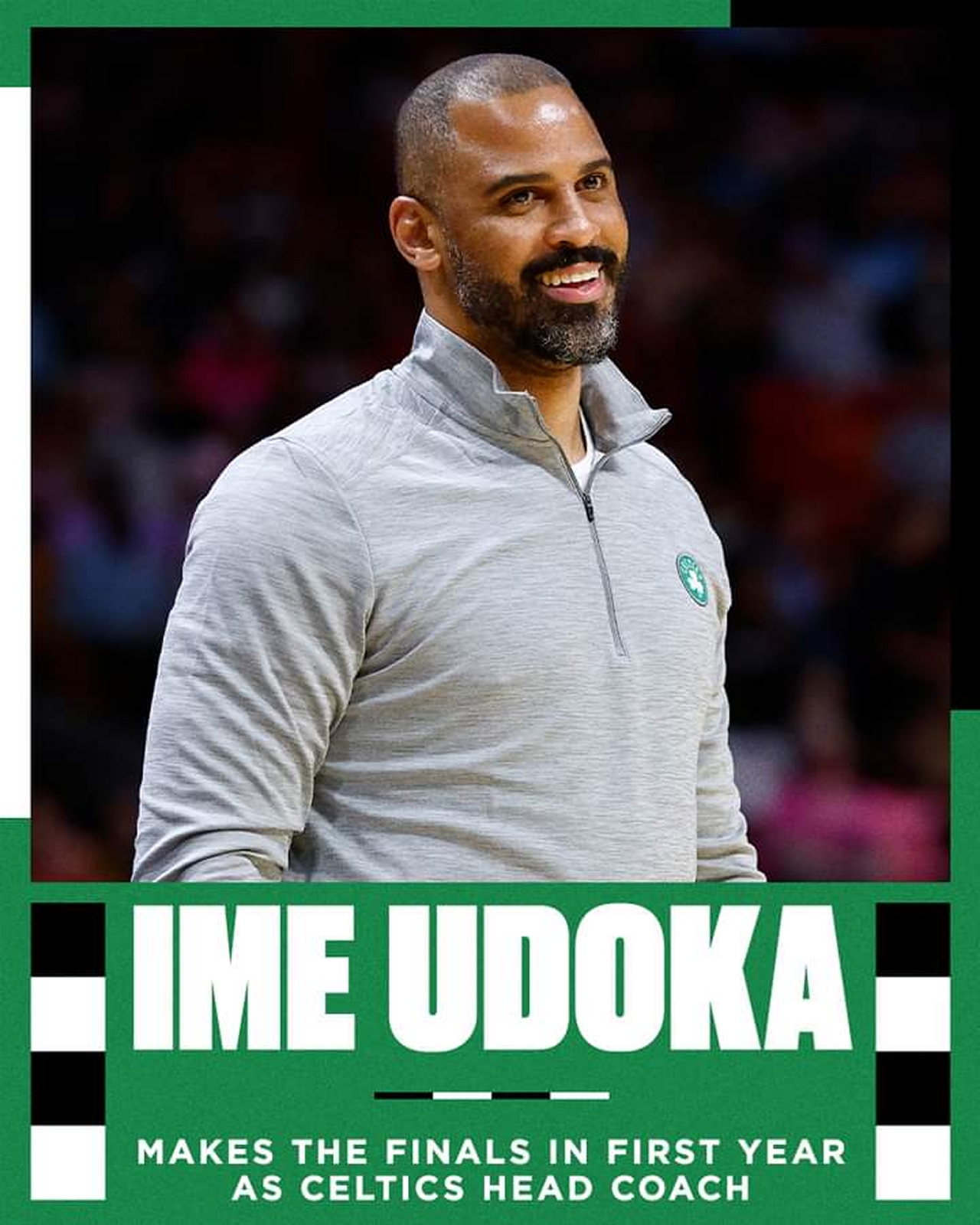 Ime Udoka and his Boston Celtics team defied the odds on Sunday night when they became the first team in franchise history since 1974 to win a Game 7 on the road, defeating the Miami Heat 100-96 at FTX Arena.

The dramatic victory secured a spot in the NBA Finals for Boston for the first time since 2010, a storybook moment for the franchise that was under .500 at the midway point of the regular season.

Ime is in his first season as head Coach in the NBA and they face Golden State Warriors for the #NBAfinals.

Coach Ime Udoka guided his Boston Celtics side to sweep the Nets in the first round, and also becomes the first coach of African descent to win an NBA playoff series

Born in Portland, Oregon to a Nigerian father and an Illinois mother on August 9, 1977. He attended Portland’s Jefferson High School.

After been on the NBDL draft, he played for several NBA teams such as Portland Trail Blazers, New Jersey Nets, Sacramento Kings and San Antonio Spurs. He plays in the small forward role.

National Team Career
Udoka was a player on the Nigerian National team, popularly known as D’Tigers. At the 2006 FIBA World Championships, Udoka led Nigeria in scoring, assists, and steals. He also played for Nigeria in the Algeria 2005 and Madagascar 2011 FIBA Africa Championships, winning a bronze medal in both tournaments.

Coaching Career
In August 2012, Udoka joined the San Antonio Spurs as an assistant coach for the legendary Gregg Popovich. Udoka would win his first NBA championship after the Spurs defeated the Miami Heat in the 2014 NBA Finals 4–1. He was there for seven (7) years.

In June 2019, Udoka was hired as an assistant coach of the Philadelphia 76ers. Udoka’s head coach on the 76ers, Brett Brown, also coached under

Gregg Popovich for the Spurs, and Udoka and Brown were on the same staff in the 2012–13 season.

On October 30, 2020, the Brooklyn Nets hired Udoka as an assistant coach.

He went on to serve as an assistant coach for USA Basketball under his Spurs head coach Popovich at the 2020 Summer Olympics in Tokyo where the US Men’s team finished Gold.

Udoka and partner, Nia Long have a son (Kez Sunday Udoka) together.

Mfon, an elder sister to Ime Udoka played for the WNBA and D’Tigress, and was later appointed an Assistant Coach of the Nigeria Women’s Basketball Team.