Great Job, Marwa, But Watch Your Back- By Simon Kolawole 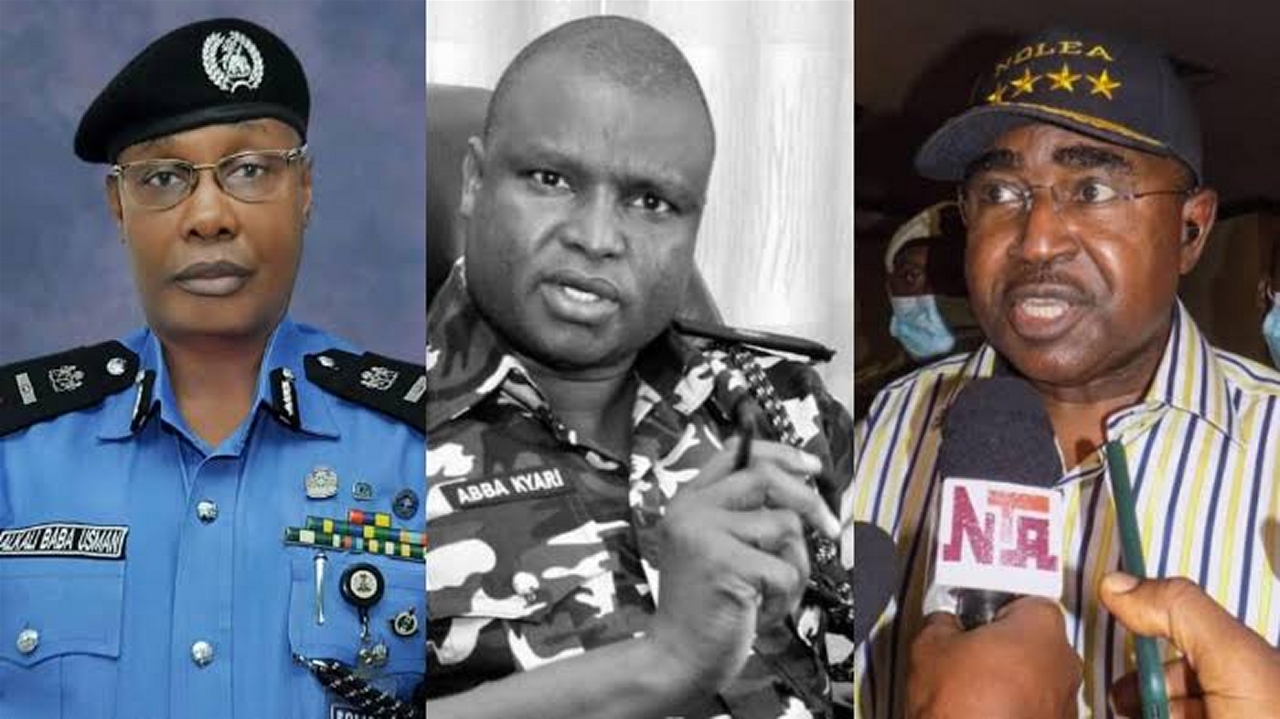 When the National Drug Law Enforcement Agency (NDLEA) declared “Super Cop” Abba Kyari wanted on Monday following his alleged involvement with an international drug cartel, I was very happy. Very, very happy. But my joy had nothing to do with Kyari, the deputy commissioner of police already indicted by the US Federal Bureau of Investigation (FBI) in the case involving Ramon Abbas aka Hushpuppi, the self-confessed international fraudster. For sure, I was glad to learn that the obviously highly connected police officer was reportedly caught on video in what appears to be a sting operation by the NDLEA. That means we should at least have an interesting case in court.

My joy, rather, was how far Brig-Gen Mohamed Buba Marwa (rtd) has gone in transforming the NDLEA in just one year as chairman. Suddenly, it is as if the NDLEA is a brand-new agency, whereas it was set up 32 years ago by the government of Gen Ibrahim Babangida, with Mr Fidelis Oyakhilome, a deputy inspector general of police, serving as the pioneer chairman. It was initially named National Drug Enforcement Agency (like the US Drug Enforcement Agency) but Nigerian grammar guards argued that “you don’t enforce drug; you enforce the law against drugs”. Oyakhilome left in disgrace in 1991 after a scandal involving him, his lady friend, the late Jennifer Madike, and drug barons.

Although the agency has had ten chief executives, I am inclined to say no chairman has had as much impact within such a short period as Marwa. According to insiders, the first thing Marwa did was internal re-organisation. He also effected long-due promotions and cleared the backlog of allowances in the perennially underfunded agency. He ramped up intelligence-led operations across the country. With a motivated workforce, the result has been the unprecedented spate of arrests and drug seizures. The agency has also heightened public enlightenment campaigns on the dangers of drug use. I have no hesitation whatsoever in celebrating these wins in this season of despair.

I must at this point admit that I am by no means surprised that Marwa has raised the bar — yet again — in public service. He is kicking asses in the war against illicit drugs. I have been following his career since 1990 when he was appointed military governor of Borno state (now Borno and Yobe) by Babangida. I recall that he set up the first joint military patrol in the country, codenamed Operation Zaki, to tackle insecurity. Borno had been at the mercy of cross-boundary banditry. Chadian rebels fighting President Idriss Déby — who had just overthrown Hissène Habré — started raiding Borno villages, similar to the current situation in the north. Marwa impressively contained the bandits.

Borno residents started sleeping well, further helped by the fact that Marwa also did quite some job in education, agriculture and infrastructure. He built roads using direct labour to save costs. The good-looking young officer, barely 38, was setting standards in public administration. His governor colleagues across the country started taking their cue from him, and in no time joint military patrols to tackle insecurity and cost-saving direct labour for road rehabilitation became a trend. In 1991, also under his stewardship, El-Kanemi Warriors FC became the first team from the far north to win the FA Cup (now Fed Cup/Aiteo Cup) since 1953. Incidentally, that was the year he was born.

Marwa soon travelled abroad on military posting as defence attaché at the Nigerian permanent mission to the UN. In 1996, he resurfaced in Nigeria when he was appointed the military administrator of Lagos state by Gen Sani Abacha, then head of state. It was tricky. At the time, the south-west was still on fire as a result of the annulment of the June 12, 1993 presidential election by Babangida. Bashorun MKO Abiola, the winner, had been arrested and detained by Abacha for seeking to reclaim his mandate. Lagos was the epicentre of the uprising against military rule, with NADECO, Afenifere and other activist groups making life unbearable for the government.

Appointing a Fulani from Adamawa state as governor of Lagos state at the height of bitter anti-north sentiments did not look like a smart move on the part of Abacha, but, amazingly, Marwa became the darling of Lagosians. The state had been gripped by insecurity, with armed robbers roaming freely, audaciously knocking on the doors of residents and seizing their belongings without let or hinderance. Marwa introduced Operation Sweep, a joint military patrol, and the pervasive insecurity was quickly brought under control. Although the soldiers were also widely accused of extra-judicial execution of suspects, the consensus was that Lagos was a much safer place under Marwa.

Not to forget how he tackled the “area boys” menace: taking them off the streets, rehabilitating them and making them undergo entrepreneurial training. Many of them became artisans and factory hands. Some went into small-scale businesses and I recall once eating what we called “area boys’ bread”. Many were engaged by the state’s direct labour agency and deployed in the reconstruction of the Mile 2-Ikorodu road, although you wouldn’t compare the quality with Julius Berger’s. Unfortunately, the rehabilitation of area boys did not endure as Nigeria transited to civil rule and the street urchins came back in full force till this day, primarily for the purpose of elections.

Lagosians celebrated Marwa for the massive reconstruction and rehabilitation of roads, coming on the heels of years of neglect blamed on lack of bitumen by the previous administrator. Marwa not only sourced for the elusive bitumen, he set up a factory to produce the hydrocarbon. Armed with two postgraduate degrees — Master of Public and International Affairs from the University of Pittsburgh (1983-85) and Master of Public Administration from the Harvard Kennedy School (1985-86) — and demonstrating a high emotional intelligence governing what was thought to be enemy’s territory, he did much in his three years to contribute a decent quota to the state’s development.

Having said all these beautiful things about Marwa’s impressive output as NDLEA chairman and his record of competence, I now need to throw in a word of caution: General, watch your back. Going after Kyari and his alleged cohorts may be desirable and commendable as Marwa seems determined to ensure that there are no sacred cows, but I hope the powers that be will not end up making a mincemeat of the NDLEA chairman. There has been an established pattern under the Buhari administration since 2019: many of those working extra time to fight the rot in the system end up in the trashcan. The evidence is too damning for any change enthusiast to ignore or downplay.

The latest victim is Ms Hadiza Bala Usman, who has just been officially removed as the MD of the Nigerian Ports Authority (NPA). While on duty, she put up a spirited fight against many enemies of Nigeria’s progress — the entrenched interests working round-the-clock to foist fraudulent agreements on Nigeria, to pillage the national treasury without remorse. She courageously refused to take the easiest way out; that is, play ball. She needed all the political backing she could get as she was being bullied and battered. Rather, she was mercilessly flung out of the window. That is her reward. But she should still be thankful that the trumped-up allegation of fraud was thrown out.

Before Hadiza, there was Ms Yewande Sadiku. She also tasted the bitter pills of pushback by the forces holding Nigeria hostage. Their parish at the Nigerian Investment Promotion Commission (NIPC) tried to wrestle her to the ground, but she gave them a bloodied nose — in the absence of political backing from a government preaching “change”. The enemies of progress fought back in equal measure, adopting the usual tactics, including frivolously petitioning three agencies and taking her to court. Yewande headbutted them all. She came out untainted but her tenure was never going to be renewed. You don’t fight corruption, waste and indiscipline in Nigeria and expect medals.

The biggest victim without competition is Mr Ibrahim Magu who, like orange, was squeezed, sucked and dumped by this administration in the most exhilarating manner. From 2015 to 2019, the biggest thing President Buhari counted as his achievement was the war against corruption and the recovery of looted funds. While I was a critic of Magu’s EFCC for the highhandedness and lop-sidedness, the truth is that he was the poster boy of this administration locally and internationally. He must now be living in regret as he vegetates after getting the boot unceremoniously. Up till today, we have not been told why he was removed. He will retire in May 2022 a sad, broken man. That is his reward.

Can you now understand why I am advising Marwa to be careful with Kyari? I love Marwa very much. He is an intelligent and result-driven public administrator with a record of service that only a few Nigerians can rival, but I am inclined to advise him to watch his back. Remember Kyari was suspended after the Hushpuppi indictment but nobody touched him thereafter. All the previous complaints against him were ignored. That says a lot about his connections. I am by no means saying Marwa should slow down or surrender, but he should know that he is now stepping on big toes. When the chips are down, he may be hung out to dry — as we just saw with Hadiza at NPA.

I am not in any sense asking courageous Nigerians in public office not to do their job. Far from it. If anything, my hope is renewed in Nigeria whenever I think of what the likes of Marwa, Hadiza, Yewande, Waziri Adio and many others have done in public service. I come across patriotic and competent Nigerians home and abroad all the time and my heart is gladdened. We have more than enough ingredients to make Nigeria great. Our biggest problem is that we are a sheepfold without a shepherd. The day we manage to have the right shepherd at the helm, our development will be so accelerated it would be hard to believe that it is the same Nigeria. Yes, a new Nigeria is possible.