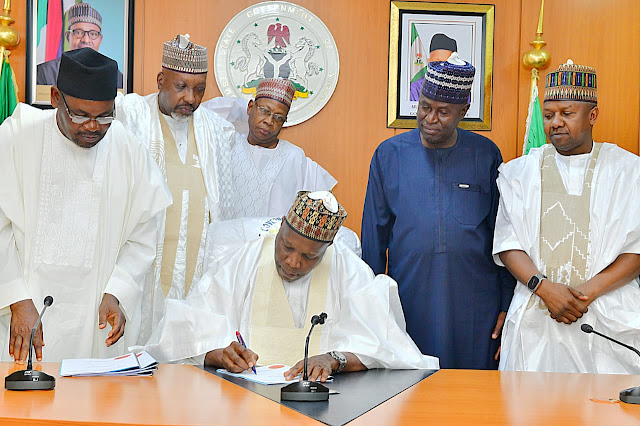 The initial budget proposal of One Hundred and Seventy Three billion Six hundred and Ninety Seven million Two hundred and forty two thousand (173, 697, 242, 000,00) had an increase of over two billion naira.

Speaking shortly after signing the budget at the Council Chamber of the Government House, Governor Inuwa Yahaya attributed the expeditious passage of the law to harmonious relationship between the Executive and the Legislature in the state.

The Governor noted that this development signals a new dawn that will guide and direct government operations in 2023 fiscal year.

He described the 2023 budget as a collaborative approach between the Executive and the Legislature right from its conceptualization, drafting and eventual passage and assent into law.

“The House has been collaborating positively with this government ever since we started and I believe we shall collaborate to the last day, the cooperation and understanding we have together and the excellent relationship that we have are what made us move, not only a step but many steps ahead of many states”.

Governor Inuwa Yahaya remarked that his administration will continue to work in partnership with the State House of Assembly for speedy passage of the State budget estimates in the interest of transparency, accountability and service delivery to the people.

He said unless and until all arms of government work in synergy with each other, delivering the dividends of democracy to the people will remain a mirage.

The Governor described the progress so far recorded in the state as pleasing and in tandem with his administration’s commitment to engender social, economic and infrastructural development to the people.

“I will like to equally pledge to the people that this government is the government of the people and we shall assiduously work to see to implementation of this law because it is our own law and making”.

He said it is only by achieving a substantial percentage of the budget that livelihood of the people can be improved for the overall benefit of the society.

He described the budget signing ceremony as historic with far reaching importance on the administration of accountable leadership.

Earlier, the Chairman of the House Committee on Appropriation, Hon Ali Baba Manu had while highlighting the 2023 Budget, said the cordial relationship existing between the Executive and the Legislature is due to the clear understanding of the concepts of development from both parties and not the rubber stamp phenomenon as some may tend to believe.

He said budget proposals under the administration of Governor Muhammadu Inuwa Yahaya have been subject of citizens engagement which brought about a people’s centered approach to social, economic and infrastructural development.

The budget signing ceremony was witnessed by senior government officials, including the Deputy Governor, Dr. Manassah Daniel Jatau, Speaker and members of the state House of Assembly, Secretary to the state Government, Chief of Staff, Head of Service, Commissioner of Finance and Economic Development, Special Adviser to the Governor on Budget, Planning and Development Partners Coordination among others.