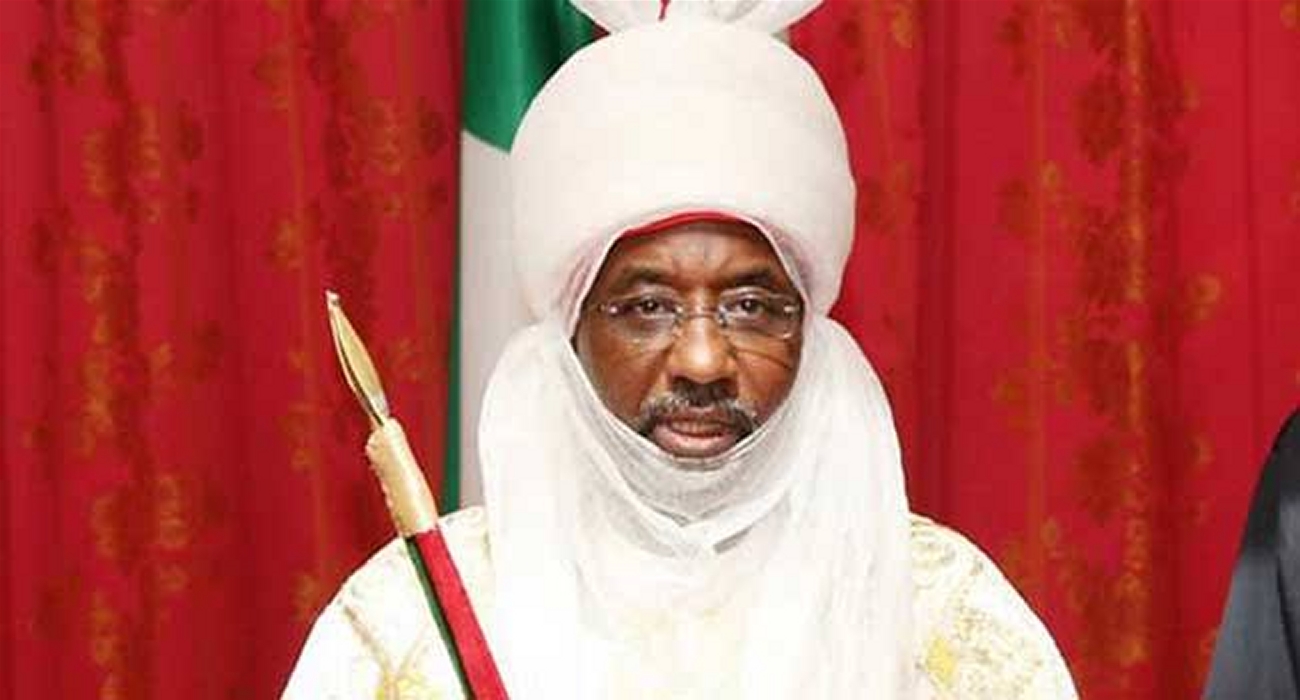 On October 12, I received a message on WhatsApp, which the platform flagged as being “forwarded many times,” about how former Emir of Kano Sanusi Lamido Sanusi (or whatever he calls himself these days) caused Governor Nasir el-Rufai to fire his Chief of Staff for the “offence” of referring to Sanusi as the “former emir of Kano.”

Because WhatsApp has become a cesspit of false, malicious misinformation, my default inclination was to dismiss the forwarded message as yet another fetid rhetorical garbage huckstered by low-IQ philistines who are still after Sanusi even after getting him dethroned.

My response to the forwarded message was: “Why won’t these lowbrows leave this man alone? Sanusi is a deeply flawed man, but he is not so flawed that he’d be this ridiculously infantile and petty.”

The forwarder of the message apologized for not being discriminating in what he believed, but a few hours later, an elder statesman from the North forwarded to me a 35-second video that featured a pastiche of soundbites from el-Rufai’s Chief of Staff identified as Muhammad Sani “Dattijo” Abdullahi and former Kano emir Sanusi that basically confirmed the forwarded message I’d dismissed as made-up anti-Sanusi propaganda.

During the Kaduna Investment Summit in September, Abdullahi, who I learned is actually a zealous admirer of Sanusi, recognized cultural and political dignitaries at the occasion in the course of his speech. “Your Royal Highness [sic] the Emir of Zazzau and the former Emir of Kano,” he said without the dimmest clue that he had stirred up a hornets’ nest.

When it was time for Sanusi to speak, he left no one in doubt that his brittle ego had been badly bruised by the reference to him as “the former emir of Kano” and that Abdullahi would pay a price for it. “And to be honest… when I listened to the—I will call him former chief of staff and he’ll understand why later,” Sanusi said amid a nervous, subdued applause. “Next time don’t call me ‘former emir.’ There is nothing like that.”

Like Sanusi threatened, Abdullahi later did become a “former chief of staff” two weeks later; he was “demoted” to a commissioner by el-Rufai. There are so many things that are wrong with this.

First, it exemplifies the most vulgar show of what French theorist Pierre Bourdieu once referred to as symbolic violence. Symbolic violence occurs when people who wield symbolic, social, cultural, or political capital use the privilege of their capital to inferiorize people who are—or who they perceive to be— subordinate to them in order to lengthen and perpetuate the power distance between them.

Many people have referred to Sanusi as a former emir of Kano, which he is because there can be only one emir of Kano, but he chose to scapegoat an appointee of his friend who can’t fight back, who is a mere appendicular part of his friend’s administration. That’s disreputably spineless. It’s flat-out cowardly bullying of a social inferior.

Sanusi said “there’s nothing like” the “former emir of Kano,” but didn’t say how he should be addressed. Well, in the protocols of address in the English language, Abdullahi was correct to call Sanusi the former emir. “Former” is the more polite adjectival alternative to the harsher but more accurate “dethroned” or “deposed.”

It would, of course, be bad form to describe Sanusi as a “dethroned” or “deposed” emir, but it would also be disrespectful to the current Emir of Kano to not indicate that Sanusi is no longer the emir of Kano. “Former emir of Kano” is the most neutral linguistic compromise that anyone can deploy to navigate the strange cultural minefield that Sanusi’s situation has created since monarchs typically reign until their death.

Everyone knows it isn’t usual for monarchs to be dethroned. It’s even more unusual for dethroned monarchs to be gallivanting and preening all over the place after their dethronement. Anyone in Abdullahi’s position would be flustered by the unusualness of having to address a reigning monarch, that is, the Emir of Zazzau, and a deposed one, that is, Sanusi Lamido Sanusi, on the same occasion.

Sanusi’s manic megalomania and cowardly symbolic violence (he still wears his royal regalia with idle courtiers in tow wherever he goes and demands to be treated like an imperial overlord) in the aftermath of his dethronement are the clearest justifications for the practice of ostracizing and confining deposed emirs to gaunt villages for the rest of their lives, which Sanusi has escaped because of his friendship with el-Rufai.

Well, let’s examine a somewhat equivalent scenario in the case of Joseph Aloisius Ratzinger who later became Pope Benedict XVI when he was elected pope in April 2005. When he resigned in 2013 instead of ruling for life— like most other popes did and like most monarchs do—he came to be referred to as “the former pope.”

A March 1, 2021 headline in the UK Guardian, which is one of the best newspapers in the English language, reads: “Former pope Benedict says ‘fanatical’ Catholics still won’t believe he’s not the pope.” An August 3, 2020 headline from CNN reads: “Former Pope Benedict recovering from ‘painful but not serious condition,’ Vatican says.” Reuters, the world’s second biggest news agency, once called him an “ex-pope.”

Sanusi’s apologists say since Ratzinger is sometimes referred to as “emeritus pope,” Sanusi should also be dignified as an “emeritus emir.” I actually like the rhythmic quality to the title. Unfortunately, Sanusi isn’t qualified to be an “emeritus emir” by any definition of “emeritus.” Emeritus status is conferred only on people who have retired “honorably” from their positions. Being dethroned is by definition a dishonorable discharge from duty.

Others say he should have been referred to as the 14th emir of Kano. First, the fact that he is 14 and the current emir is 15 makes him a “former emir” by default. Second, most people don’t keep count of the number of emirs that Kano—or any monarchy—has had in their active memory. It’s useless knowledge. And it’s unfair to expect el-Rufai’s former chief of staff to remember that, more so that he didn’t mention the numerical position of the Emir of Zazzau along whom he introduced Sanusi.

Plus, the counting is arbitrary and contestable. Sanusi may be the 14th Fulani ruler of Kano, but he isn’t the 14th emir of Kano—if by “emir” we mean a Muslim ruler. (Emir, after all, is an English word for a Muslim ruler, which came to the language via French, ultimately from the Arabic amir, which basically means ruler.)

The first Muslim ruler of Kano was Yaji I who ruled from 1349 to 1385. He proclaimed Islam as Kano’s official religion and Kano as an Islamic emirate. The 1804-1808 jihad, which brought Sanusi’s ancestors to power in Kano, took place many centuries after Kano had had Hausa Muslim rulers.

Most importantly, though, the most revered title is no title, and only people who battle an inner hollowness try to compensate for their inferiority complex by hanging on to titles. That is why Isa Ali Ibrahim Pantami bought a needless “fraudfessorial” title from FUTO. It is why Nigerians who were once professors but who no longer teach at any university resent being addressed as “former” professors.

Many years ago, I watched a debate between the late South African Islamic scholar Ahmed Deedat and a Christian preacher. In the spirit of conversational civility, the Christian preacher wanted to address Deedat by his preferred title, so he asked Deedat if he wanted to be called “Sheikh” or “Mr.”

My recollection of this televised encounter is hazy, but I distinctly recall Deedat saying something to the effect that the best title is no title, saying he hoped he’d get to a stage in life where a title would be unnecessary to identify him.

That encounter lingers in my mind to this day because I’ve discovered that the more consequential people are, the less need they have for titles to make them consequential. Karl Marx got his PhD in his early 20s, but nobody addresses him as Dr. Karl Marx. Sigmund Freud had a doctorate in medicine, but no one calls him Dr. Sigmund Freud.

Martin Luther King, Jnr. got his PhD in his 20’s, too, but it’s increasingly becoming passé to call him Dr. Martin Luther King. (It was necessary to call him by his full titles—The Reverend Dr.—when he was alive because Black men of his time were belittled as “boys” irrespective of their accomplishments).