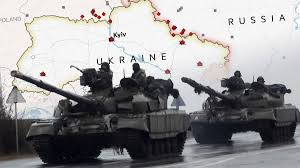 Yes, Ukraine can strike back with aircraft for one. It is unknown how many Su-25s are still flying, but these could hit Russian cities.

But why hit a Russian city?

Ukraine cannot possibly hope to curtail Russian nation’s war-making capacity, communications, or anything else critical to the war effort. And that’s the only reason to hit a city. Not only would it convince Russians that Putin was right, it would be a waste of valuable ordinance, already in limited supply.

Ukraine has its hands full blunting the thrusts of Russia in their own country. Best to carefully mete out their bombs in strikes precisely where they need them. Hitting a Russian city will not repel an armored strike within Ukraine.

Ukraine also has an unknown number of OTR-21 Tochka tactical ballistic missiles. These could also be aimed at a Russian city, but why?

Ukraine has reportedly launched a Tochka strike at Donetsk. And now here is where using these weapons is a double-edged sword. Now it works to Russia’s advantage as propaganda.

This just in, and much thanks to Vadim Mikhnevych, Ukraine claims they did not fire the Tochka. Russia fired the Tochka, and now blames Ukraine in a bid to generate a scrap of positive PR.

According to ukrinform.net:
“The fact is that the missile, tail part of Tochka-U is heavy. When a warhead separates from it in the air, it preserves its direction and speed on its own”

The photos of the incident taken in Donetsk show that the missile part of Tochka-U lies on the Shevchenko Boulevard, with its tail pointing to the southeast and its front – to the northwest. Based on this, we can geolocate that the missile arrived from the southeast. “The territory controlled by Russian forces and separatist forces is southeast [of Donetsk] along the entire 120 km – the hitting range of Tochka-U. There are no Ukrainian forces there. Accordingly, the Ukrainian missile could not arrive from there,” CIT analyst explains.” [my bold]

How would it look if Ukraine fired at a Russian city? Not good, that’s what. Ukraine might lose support when it needs it most.