Congresses Of Gun And Godfathers- By Lasisi Olagunju 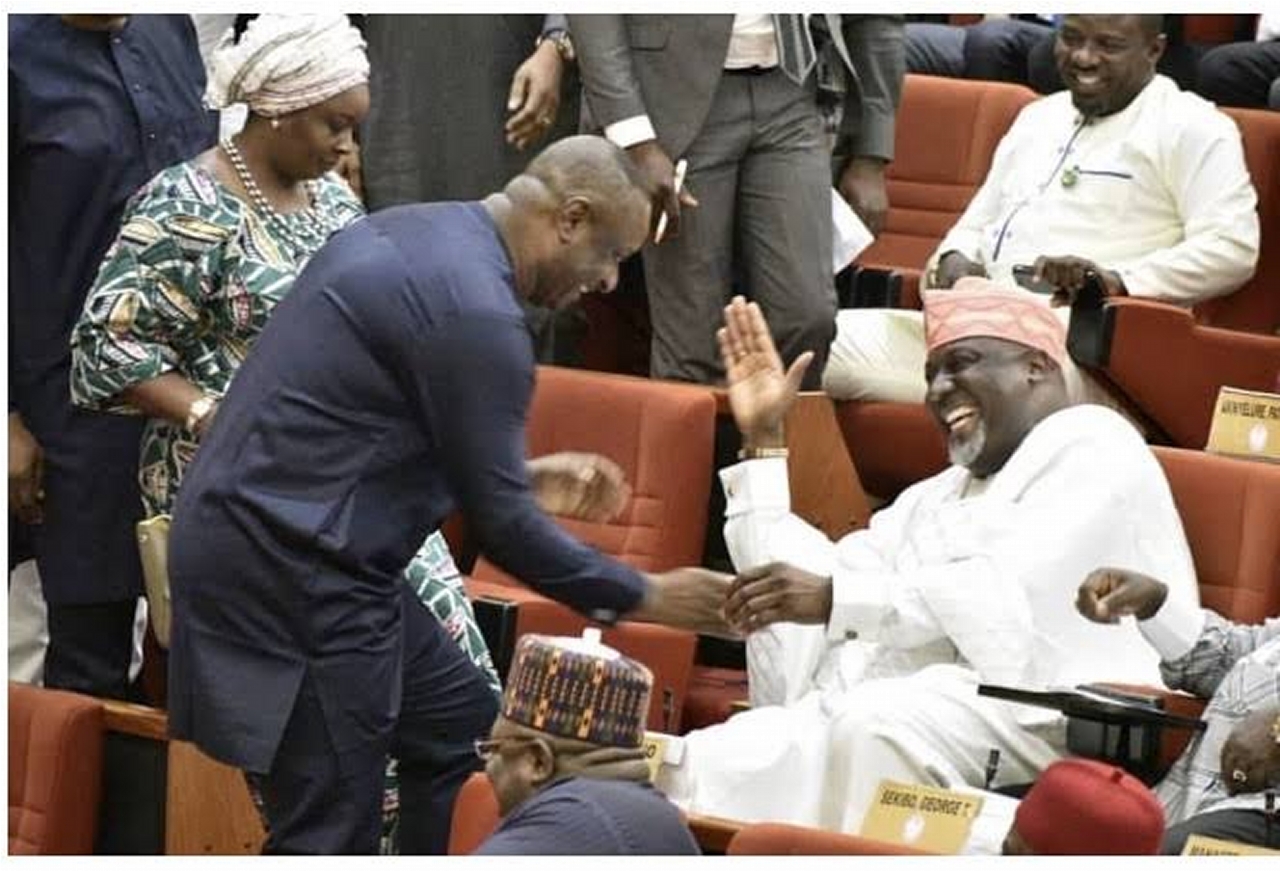 Today’s party politics and adultery have same rule of engagement: there is no commitment to fidelity and conjugal permanence. We are in this thing for a reason and it is for a season. It is not till-death-do-us-part. We respect political seminaries abroad thinking they are homes of decency; but they are also suspects in perverse acts. The difference is that they are discreet about their bad ways of doing ‘great’ things. Parties here don’t switch off the light to do evil. They go to the market square to subvert faith and faithfulness; they teach reverse meanings of law and loyalty. Here you watch in horror as upstart crows beautified with the feathers of the king of birds defecate on the palace with impunity. You watch in shock as crows flap their vaunted wings in the face of the angels who supplied them their flight. You also see moths and butterflies seeking a race with the eagle. I am discussing here the two big political parties in Nigeria and their states of turmoil. They did their state congresses two days ago and it was all mobster battles. If they had delayed the congresses till this week, we would have said they were celebrating the anniversary of the EndSARS shootings. In some states, godsons rolled out battle tanks against godfathers – and vice versa. In some others, we saw naked test of guns between old gang mates. People may have died. And you ask: over what?

Why are the parties imploding? The election season is here. Candidates will be elected or selected. This is the time to demand and take pounds of flesh from persons who grew wings, and it is time to reward loyalty. Governors have used state powers to harvest delegates for indirect primaries. Senators have dramatically responded by using their own legislative powers to ‘sack’ the delegates. They have made the delegates useless with the recent vote for direct primaries for parties. So, the congresses and the counter-congresses you saw at the weekend were a decisive phase in the battle for the soul of Nigeria.

While politicians are taking their destiny in their hands using fair and foul tools, ordinary Nigerians are left forlorn in their own war of survival. They are alone, all alone. And if they are abandoned to their suffering, what are they supposed to do? Wait on their enslavers to free them without a fight? “Power concedes nothing without a demand. It never did and it never will,” said Frederick Douglass, American social reformer, abolitionist, orator, writer and statesman. In August 1857, he delivered his famous Emancipation Speech which should show the way to the Nigerian slave of today. The opening line of Douglass’ speech is “If there is no struggle, there is no progress.” Douglass told the slave that if he would be free, “he must strike the blow.” A man who would not fight for himself when he has the means of doing so, Douglass said, would be a moral pauper and a drag on the wheels of society. He said more than that. Hear him: “The world in which we live is very accommodating to all sorts of people. It will cooperate with them in any measure which they propose; it will help those who earnestly help themselves, and will hinder those who hinder themselves. It is very polite, and never offers its services unasked.” It would appear that only Nigerian politicians understand Douglass’ message and are keeping to his counsel in their battles with fellow principalities of politics. The stupid street is still on the floor, stupid; it is waiting for 2023. The day the Nigerian poor reads Douglass correctly is the day Nigeria will get a life, and will be free. But that day may never come.

You saw the headlines yesterday. Gunshots at party congresses. Who fired the shots? The poor. The parties, APC and PDP, have become Nigeria, they are fractured, ragged and ugly. Parallel APC congresses in Niger, Kano, Osun, Ogun, Abia, Akwa Ibom and so on. Lagos is even said to have had three – two of the congresses belonged to rebel groups seeking to repeat David’s catapult feat with or without the anointing of the son of Jesse! There are bigger crises in the APC because it is the present janitor of favours. Remember what Igbo people say about goats following only today’s holder of palm fronds. And there is no decorum with goats. Every faction in every state is a mafia-dom where a godfather reigns and thinks himself lord and saviour. And they have just started. It will get messier and scarier going forward to the tipping year, 2023. The stakes are very high. The parties are kingdoms of power and money, they are taken and retaken and kept only by violence. That should explain why there can never be retreat or surrender in the parties. That is why we are still asking who really won on Saturday in the various state chapters.

Today’s ultimate godfather is in the Villa. He is in the lair there playing God with dubious silence. With his cardinals of death, he farms crises everywhere there is land. He sows discord in this heap and plants rebellion in that ridge. He looks at his old comrades as expended ammunition; he sees in them people who are unfit and unworthy of compensation for past favours. Rebels who undermine their bosses in the regions run to Abuja to get pats on the back. But the pope in Abuja is only being true to power in its raw form. People who make kings are always the first casualties of kingship. The blood of makers of kings is the premium canvass for royal dance steps. It is the reason history is not entirely wicked to Bashorun Gaa of old Oyo. His intrigues had a root in past ugly experiences with ungrateful kings. Like his ancestors, the Bashorun was a godfather who made and unmade kings as it pleased them.

Sometimes you think what you see in politics are too ghastly and gory to be real: The brutality of the moral brawl, the imperfect cues and miscues and the coldness of the bloodletting. The warning is always out there: if you ever consult spirit-men to spin victory your way, ensure you keep to the dos and don’ts. Jilting the Bashorun comes with a huge price and you don’t pay with the currency of omoluabi. No. It is war.

Two brothers, Jacob Karl Grimm (1785–1863) and Wilhelm Carl Grimm (1786–1859) were cultural researchers and collectors of German fairy tales. One of such tales is The Godfather. It is a story of desperation and deliverance; promise and betrayal; decay and ruin. With a little modification, I run the translated version here as published by the authors:

The man, still walking down the highway, meets Death. The man decides to make Death the child’s godfather. He loves Death because it takes away the rich and the poor without discrimination. The next Sunday, Death becomes the child’s godfather.
When the boy comes of age, Death appears to him and leads him into the woods where special herbs grow. There, Death promises the boy that he will make him a famous physician. It is explained that whenever the boy visits an ill person, he sees Death appearing next to the sick person. If Death stands at the person’s head, that person is to be given the special herb found in the forest and he will be cured. But if Death appears at the person’s feet, any treatment on them would be useless as they would soon die.

The boy soon becomes famous, just as Death had foreseen, and receives plenty of gold for his amazing ability to see whether a person would live or die. Soon, the king of all the lands becomes ill and sends for the famous physician.
When the physician goes to see the king, he notices immediately that Death is standing at the foot of the bed. The physician feels pity for the king. There must be a way out. He decides to outsmart Death. The physician turns the king around in his bed so that Death now stands over the head. He then gives the king the herb to eat. This heals the king and speeds up his recovery.
Soon after, Death approaches the physician, expressing anger for the betrayal and disobedience to his rules. But because the physician is Death’s godchild, he does not punish him. Death then warns the physician that if he ever betrays him again, he will take the physician’s life.

Not much later, the king’s daughter becomes ill and the physician goes to the palace. The king promises his daughter’s hand in marriage and the inheritance of the crown if the physician cures her. When the physician visits the princess, he sees Death at her feet. But, he is captivated by the princess’s beauty and thoughts of being her husband – and king. The physician turns the princess around so that Death is at her head. He then feeds her the herb.

Just as the princess is coming around, angry Death grasps the physician by the arm and drags him to a cavern. In this cave are thousands of candles, each burned down to different lengths. Death explains that the length of each candle shows how much longer a person has to live. Death then shows the physician his candle and it is very short, suggesting that the physician does not have much longer to live.

The physician pleads with his godfather to light him a new candle so that he may live a happy life as king and husband to the beautiful princess. Death says he will not. He tells him that in order for another candle to be lit, one has to go out…

So, how did it end? The physician’s candle soon burnt out. He lost his life; he lost the joy of having the beautiful princess as wife; he lost the prospect of being king too. He lost all to the will of Death, his godfather.

Lesson: what God has done for me, it shall be permanent. Only those who take their case to God are permitted to say Amen to that prayer. The poor man with thirteen children in the above story skipped God in his search for help. He chose Death as his child’s godfather. In politics and in everything, godfathers are certain Death. They have nothing enduring to offer unless you take rams to their shrines every day and every night. They give in units; they take in tens. Like lit candles, the godfather’s love burns out always in regrets and death. Death itself may die but the first to die is the child with his destiny.