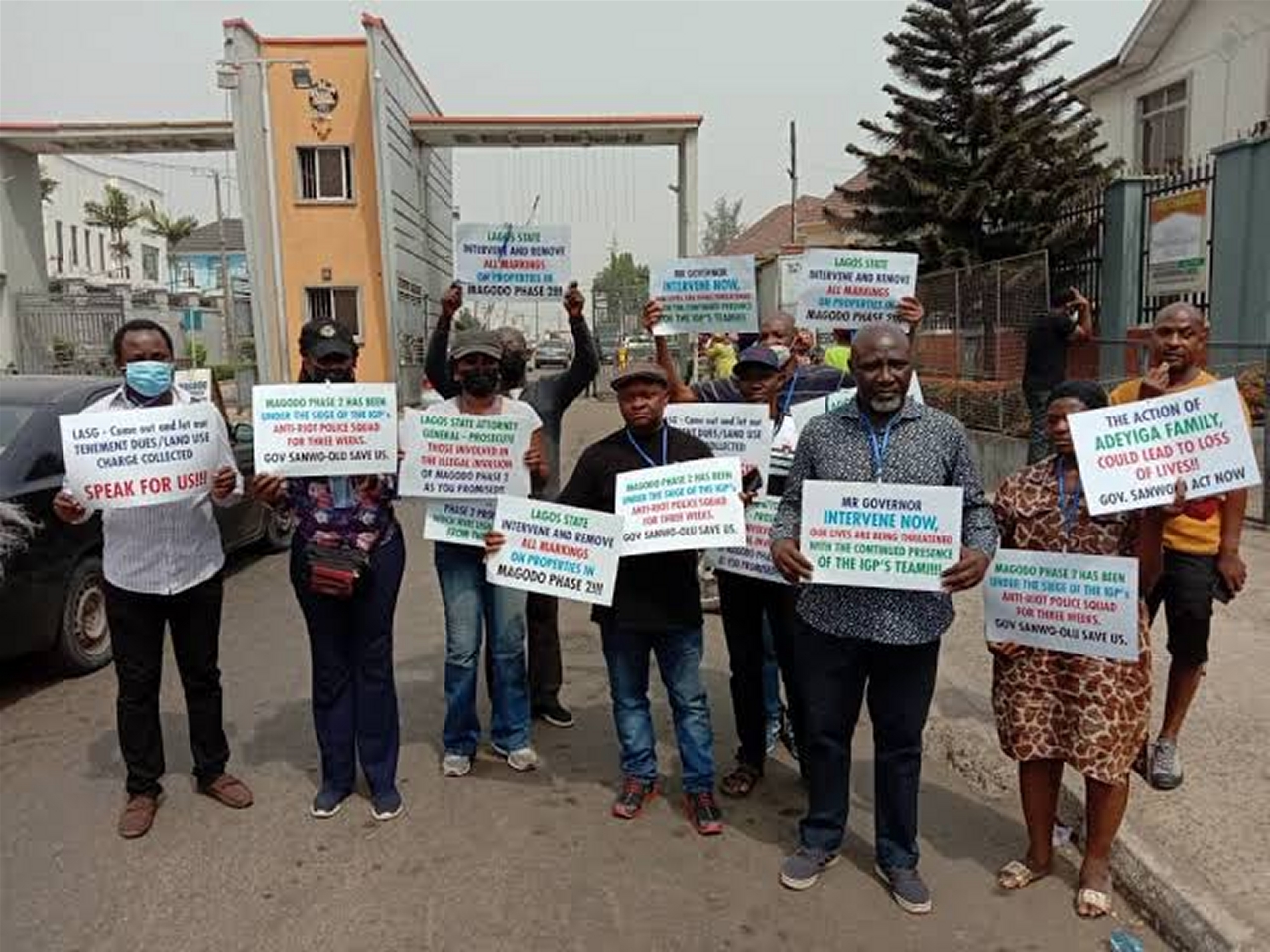 Lest I forget, I have been living in the Magodo Residential Scheme II, fancifully called “Magodo GRA” by residents, for 20 years: first as a tenant and now as a homeowner. One day in 2012, I got home and saw a letter hanging on my gate. It was written by a retired Supreme Court judge who said he was a legal adviser to one family. He said the Supreme Court had ruled in favour of the family concerning Magodo and that my land now belonged to his client. I called the lawyer who had helped me handle the paper work, including the Governor’s Consent. If it was the usual troubles associated with “omo onile” (land speculators), I would understand. This was different and disturbing.

I later sent an SMS to Mr Babatunde Fashola, then governor of Lagos state. I drew his attention to the troubling development and asked if he was aware of the letters being circulated. As it is customary of him, he immediately called me, said he was aware and took time to explain the facts of the case. Efforts were being made to resolve all the issues, he said. I then went to sleep. But sometime in 2017, when Mr Akinwunmi Ambode was governor, drama ensued as lawyers representing Chief Adebayo Adeyiga and other litigants came to “enforce” the Supreme Court judgment, having secured a “warrant of possession” from the Lagos state chief judge.

Everything went quiet again until December 21, 2021 when the residential area was invaded by 200 policemen sent from Abuja by Mr Usman Alkali Baba, the inspector-general of police, with the full backing of Mallam Abubakar Malami, the attorney-general of the federation. They came with a bulldozer and spray paints and started marking houses for “possession”. I felt something was not right. Can they possess fully built plots, housing probably 4,000 families, just like that? Where in the world would private individuals start bulldozing hundreds of houses? What about the thousands of people who live there? I know things are low in Nigeria, but didn’t think they had gone that low.

It was after the invasion that I began to develop deeper interest in the history of the matter. I came up with some findings. One, in 1969, two years after Lagos state was created by Gen Yakubu Gowon, the fledgling state government, under Brig-Gen Mobolaji Johnson, acquired a large expanse of land covering Ojota, Ketu, Magodo, Agidingbi and Omole. The government, thereafter, developed some parts and left others idle and — as it is typical of us in Nigeria — land speculators took ownership, parcelling and selling the plots as they liked. This went on until 1984 when the military governor of Lagos state, Group Captain Gbolahan Mudashiru, moved to repossess the encroached areas.

Two, Shangisha was one of those repossessed. The government, as it is also typical of the military, began to demolish the structures. Legally, government would say this was right by claiming they were illegal occupants. But there was a human angle: these were people’s properties. Families were displaced. The original landowners, I was told, had been compensated by the government but the landlords whose houses were demolished were not. They formed the Shangisha Landlords Association (notice they didn’t say “landowners”) to lobby for their own compensation on humanitarian grounds. Luckily, the government budged and started allocating land to some.

Three, new military governors came on board. Mudashiru was succeeded by Navy Captain Mike Akhigbe in 1986, followed by Col Raji Rasaki in 1988. Rasaki, you may recall, was the no-nonsense “akson” governor who demolished Marako shanties. The Rasaki administration stopped negotiating with the Shangisha landlords. Adeyiga and others thereafter went to court. Again, as it is typical of us in Nigeria, government did not pay diligent attention to the case. In December 1993, the court ruled that the landlords be given “preferential plots” in the Magodo Shangisha scheme. By then, there were still enough plots to compensate them but the government decided to file an appeal.

Four, the state lost the appeal in 2001. It appealed again and lost at the Supreme Court in 2012. The apex court upheld the order of “mandatory injunction” made by the trial court in 1988 that the state government “shall forthwith allocate 549 plots to the plaintiffs in the said Shangisha village scheme”. With legal options exhausted, the Fashola administration started negotiating with the judgment creditors. It said Magodo plots had been fully allocated and offered them “preferential plots” elsewhere. Other creditors, such as the families of Yemi Ogunshola, Jelili Yaya and Adeleke Adefala, accepted the offer. Adeyiga and others, however, did not accept the offer and insisted on Magodo.

Five, I understand that because the Ambode administration did not progress with the negotiations, the litigants sought, and got, a writ of possession from the chief judge of Lagos state on March 16, 2017. That was what they came to execute in Magodo that year. Some armistice was reached there and then but the danger remained hanging. The state government, in the meantime, filed an appeal against the writ. That appeal is pending. In December 2020, the state also filed an application for interlocutory injunction before the Court of Appeal to stop Adeyiga and others from executing the writ. Again, this is pending. This was the state of play before the December 21, 2021 invasion.

I will now make my comments and observations on the dispute based on the information I have, some of which I cannot make public for now. I admit that my knowledge of law is highly limited. I also admit that being an interested party, I am susceptible to bias. As the Yoruba would say, who would a fly take sides with but the man who has an open sore? But I am convinced that some things are common sense, and some things have also been well established in law and should be sufficient guide for us, irrespective of my bias. My aim, at the end of the day, is to see how all the parties can face the reality and work out amicable ways by which the dispute can be resolved once and for all.

Here we go. The court declared in 1993 that members of the Shangisha Landlords Association “whose lands and/or buildings at Shangisha village were demolished by the Lagos State Government during the period of June 1984 to May 1985 are entitled to the first-choice preferential treatment by the Lagos State Government before any other person(s) in the allocation or re-allocation of plots in Shangisha village”. For one, the judgment is very clear: the litigants were to be allocated plots.

The court did not say they should take over already allocated plots, allocate plots to themselves or seize existing properties. In fact, the court did not award any compensation for the demolished structures.
Unfortunately, the government said there were no more plots to be allocated in the Magodo scheme by the time the litigation was exhausted in 2012. This was a major issue. The rational way forward, in my view, was an out-of-court resolution. Some litigants accepted alternative plots in other schemes but Adeyiga and others insisted that there were still plots in Magodo which government officials were allocating to themselves. If I am not mistaken, this may be the real reason Adeyiga and others are angry. They probably saw many empty plots that were still being allocated and doubted the sincerity of the government. When trust breaks down, it could be hard to repair.

Two, I would say since the writ the creditors are trying to execute has been challenged in court, they should not have brought bulldozers, police and thugs to Magodo. Judges always say parties to a lawsuit should not take an irreversible action while a court process is on. Three, by the Sheriffs and Civil Processes Act, a writ is enforced only by the office of the deputy sheriff of the state high court. There is no role for the Supreme Court, IGP or the AGF. The deputy sheriff only writes to the commissioner of police, not the IGP, for security back-up. Another option for the creditors, if the judgment is not being obeyed, is to initiate contempt proceedings against state government.

Meanwhile, it is a major shame that Malami would go beyond his brief and ask the IGP to send police to enforce a court judgment that is clearly not under his jurisdiction, going by the Sheriffs and Civil Processes Act. More so, the writ is being challenged in court. Can you imagine P&ID getting the AG of the UK to enforce the $10bn award against Nigeria while we are still in court? Can you imagine UK freezing Nigeria’s accounts in British banks and seizing our oil vessels on the high seas to enforce the award? That is exactly what Malami is trying to do in Magodo — while fighting against the same thing in the UK. But is it not Malami, President Buhari’s almighty AGF? He can do and undo.

I have read some funny comments by interlopers who know nothing about the matter. One even called the litigants “Magodo Landlords Association” and went on to spew fluent gibberish. It is being painted as the rich oppressing the poor. Or something like David vs Goliath. That would hold water if the original land owners were not compensated. Rather, it is the landlords who bought land from landowners that want their own compensation. Most of them have accepted what they were offered in other residential schemes. Adeyiga and others are within their rights to reject what they were offered. It is an economic decision. Magodo surely has more value than Badagry and Ikorodu.

Above all, we need an amicable resolution. Sincerity and common sense are critical at this stage. I commend Governor Babajide Sanwo-Olu for de-escalating the tension. I commend the Shangisha landlords for returning to the negotiation table. Magodo residents remain apprehensive. They are not a party to the suit. They did legitimate business with the government. They desire a reasonable resolution. May I repeat, though, that the court only ordered the “allocation of preferential plots” to the aggrieved landlords. The court did not say they should allocate plots to themselves or take over already allocated plots by resorting to self-help. This is a very significant fact of the judgment.