2023: Neither Tinubu Nor Osinbajo Is Fit- By Tunde Odesola 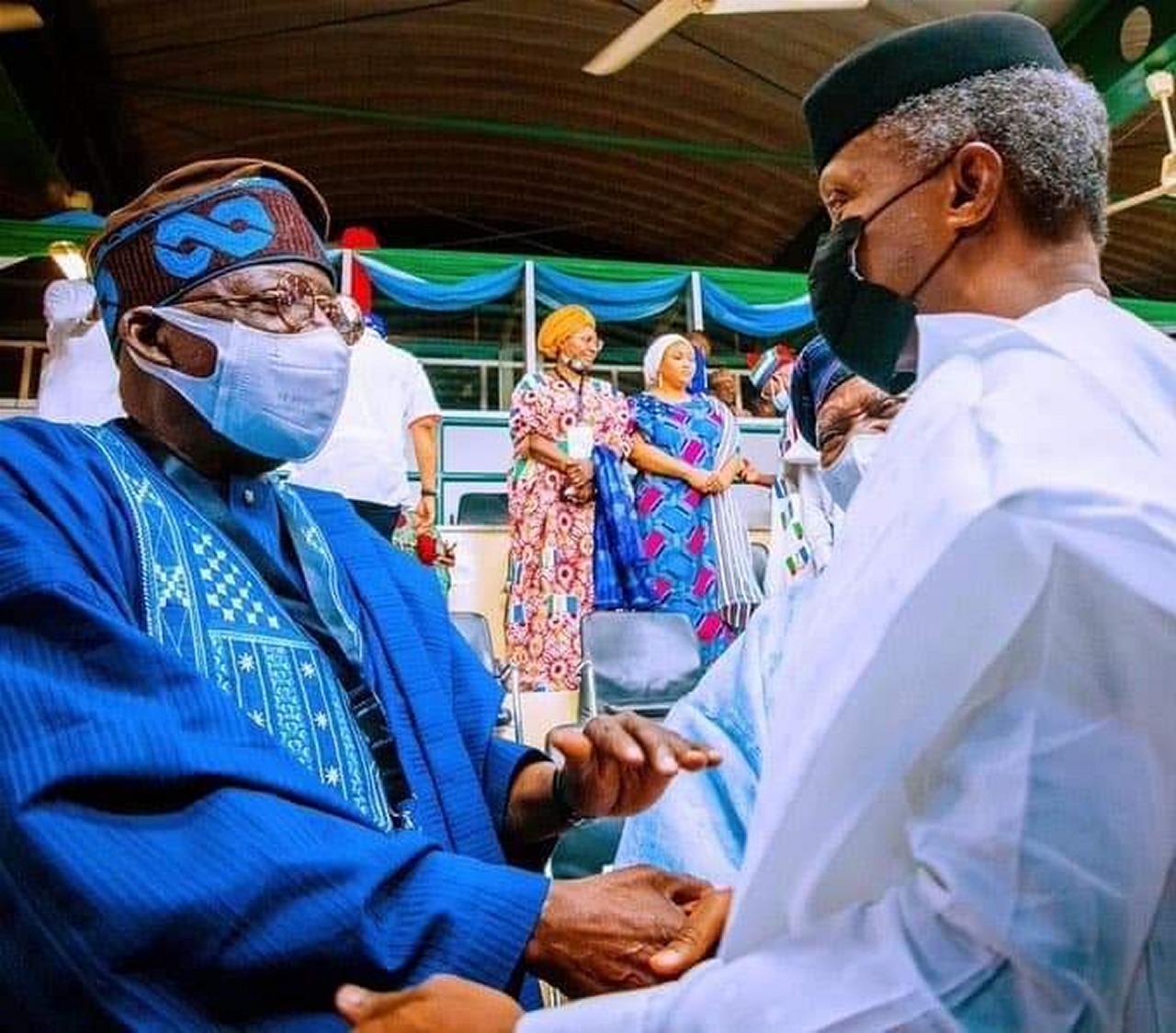 2023: Neither Tinubu Nor Osinbajo Is Fit- By Tunde Odesola

Tossed up, Nigeria’s spinning politics is a coin with three sides: head, tail and middle. All three sides came into play on Friday when a photograph taken at the South-West presidential aspirants’ meeting of the All Progressives Congress hit the internet with a twist in the tail.

In the photograph, some of the South-West APC presidential aspirants flashed smiles on their faces but kept bile in their hearts. They held hands out to shake but swords lay hidden within their sleeves. If looks were daggers, many would have been stabbed into shreds.

There was more peace in Ukraine than the peace in the Lagos House venue of the meeting at Marina. There was more love in Sambisa Forest, and more warmth on the ocean floor than the dubious affection displayed as Yoruba political maturity to deceive that all is well.

All is not well in the APC well. The reported refusal of the Minister of Interior, Ogbeni Rauf Aregbesola, to sit beside APC National Secretary, Otunba Iyiola Omisore, and Osun Governor, Adegboyega Oyetola, was a testimony that the water in APC’s well is on the boil.

An unknown evil genius sympathetic to Tinubu had put his creative mischief to use, twisting a religious tale into the innocuous APC picture, and posted it online, setting the stage for an online war.

The evil genius had cropped out other stakeholders of the APC from the picture, leaving out only 13 cross-sectional leaders of the ruling national party. He then placed the APC picture above the timeless painting of the Last Supper involving Jesus Christ and his disciples, drawn by Leonardo da Vinci.

When the picture of the 13 APC leaders appeared online alongside the 13-man painting of Jesus and his 12 disciples, it was captioned, “The Last Supper.” Subsequently, supporters of Tinubu and those of Osinbajo scrambled for the head and tail of the spinning political coin while some circumspect few made a grab for the middle.

Osinbajo’s supporters, not prepared to tolerate the ‘betrayal’ tag being pinned on their aspirant, asked: “Who is Jesus in the picture?” Tinubu supporters retorted, “Judas knows himself.”

Preferring the middle side of the coin, however, I thought the best caption to the APC picture was, “A Jesusless Last Supper,” because I didn’t see no Jesus at that supper, nor did I see one Judas. Remember, Judas was the treasurer of Jesus’ ministry. He got 30 shekels of silver. He was a rich man. Only rich people can afford to pay N100m for presidential form.

Contrary to newspaper reports, the aim of the meeting wasn’t to pick a consensus candidate. The aim was to douse the political tension among the presidential sons of Oduduwa.

Baba Akande, a staunch Tinubu supporter, strongly believes that the former Lagos governor will crush the former Lagos commissioner for justice and attorney general in a free and fair presidential primary. Akande feels the campaign of calumny between Tinubu and Osinbajo’s supporters will hurt the eventual APC candidate, hence the need to rein in the warring party supporters.

Despite his obvious frailty, which he alluded to by saying the job of the president doesn’t require strength but brain, Tinubu appears to have wormed his way deeper into the hearts of party leaders across the country with his stipendiary brand of politics even as the catchphrase, “Judas the betrayer,” has caught on among party members.

What does a Tinubu presidency portend for Nigeria? Danger. His prebendal variety of politics will asphyxiate the political space, put public money into private pockets, and make a few overfed cronies have a sense of entitlement to national treasury, singing jeun s’oke ko tun jeun s’apo.

Tinubu’s Michiavellian politics has been sustained in Lagos by the embattled National Union of Road Transport Workers, a murderous organisation that has worked hand in glove with the ruling party in Lagos State since 1999. Nigeria doesn’t need such a man for president.

If Tinubu’s godson and erstwhile state chairman of the National Union of Road Transport Workers in Lagos, Musiliu Akinsanya alias MC Oluomo, could be rewarded with the hurriedly created position of Chairman, Lagos Parks Management Committee, after being sacked by the national NURTW, lives on Lagos streets would be cheaper than dirt if Tinubu emerges as President.

In Daniel 4:14, there is an instruction on what to do to bad trees, “Cut down the tree and chop off its branches; strip off its leaves and scatter its fruit. Let the beasts flee from under it, and the birds from its branches.”

Tinubu, Osinbajo’s former boss, never pretends to be a saint. He neither wears a turban nor clutches a rosary. His son, Seyi; daughter and Iyaloja General of Nigeria, Folashade Tinubu-Ojo, and other family members unashamedly clutch the fattest pies in the land while hunger stalks the land. But what is Fiyin, the son of Osinbajo, doing with a big bag of dollars on the bus taking guests to the wedding of Buhari’s son, Yusuf? And you think Osinbajo hasn’t learnt anything from Tinubu, and Buhari whose daughter, Hanan, turned presidential planes into playthings.

Someone asked me a question about which Man of God was involved in multi-billion naira road contracts in Osun during the Aregbesola years. I answered, “I no know book o, ishh.”

Another person also asked me, “Which servant of the Most High is currently doling out dollars and naira to traditional rulers, market men and women?” I replied, “If Buhari could reward the indicted, suspended and disgraced Ibrahim Magu with AIG promotion, why arrest IPOB members for calling Nigeria a zoo?”

At a time when the strike in Nigerian public universities has entered its third month, the spouses of VCs are embarking on a N1.5m per person trip to Turkey to learn how to help their VC husbands build capacity. Would the husbands of female VCs also partake in this madness?